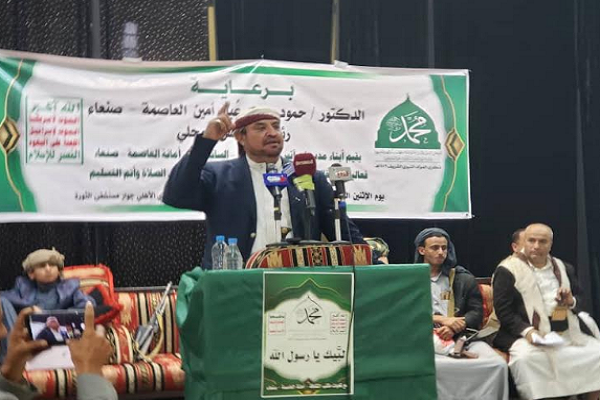 A celebration was held in Majzar city in the Ma’rib Governorate on Monday, Ansarollah.com website reported.

In a speech at the program, Head of the National Women Association Nasserah al-Sharif underlined the importance of celebrating the auspicious occasion to promote the love for the Holy Prophet (PBUH) among the youth and raise the new generation based on the morality, values and teachings of Prophet Muhammad (PBUH).

She also highlighted the need for following the Seerah of the last messenger of God in helping those in need and standing up to injustice and oppression.

Several ceremonies were also held in the capital Sana’a on Monday.

In one of them organized by the Ministry of Sports and Youths, Mohamed Hussain al-Muayyedi, the sports and youths minister, said Milad-un-Nabi celebrations are a response to the Zionists and those in the West who insult the Holy Prophet (PBUH).

Another speaker said the ceremonies highlight the Yemeni people’s devotion to the Prophet (PBUH) and commitment to his Seerah.

Meanwhile, the University of Sana’a is hosting an art, media and cultural festival featuring “Love for Prophet Muhammad (PBUH)”.

The 12th day of the lunar Hijri month of Rabi al-Awwal, which falls on October 19 this year, is believed by Sunni Muslims to mark the birth anniversary of Prophet Mohammad (PBUH), while Shia Muslims regard the 17th day of the month as the birthday of the last prophet.

Muslims in different countries celebrate the auspicious occasion for weeks.