General
News ID: 3476027
TEHRAN (IQNA) – A suspicious fire at a mosque in University Place in Washington State of the US forced mosque leaders to pause services at the building due to damage. 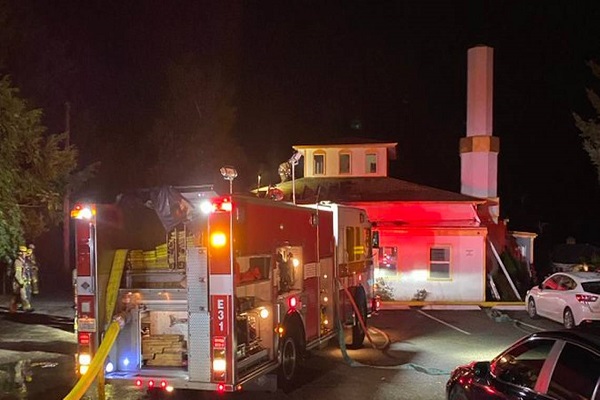 The fire started at the Islamic Center of Tacoma just before an evening prayer was scheduled to begin.

Two people were inside but they were able to evacuate, and no one was injured. An arson investigation was started by the Pierce County Sheriff’s Department. Deputy Jeffrey Papen said witnesses reported seeing someone who may have started the fire fleeing the scene.

Abdulhakim Mohamed, imam at the Islamic Center of Tacoma, said the mosque’s community is in shock. He said the building can’t be used, and mosque leaders aren’t yet sure where services will continue.

“We’re disappointed,” Mohamed said. “God has his own plan. We do not know what that is yet. We plan what we can right now. Our main focus right now is to find an alternative place for our services.”

Fire crews were called at about 8:10 p.m. to the center at 2010 Bridgeport Way West, West Pierce Fire & Rescue spokesperson Jenny Weekes said. Arriving crews found smoke coming from the roof. Most of the fire crews’ response was limited to the roof.

Weekes said she wasn’t sure the extent of the damage, but that the inside and outside of the building suffered smoke, water and fire damage.

The fire started just before an evening prayer was to begin, Mohamed said. He said two people were inside, and they were unaware of the fire until neighbors spotted smoke.

The Islamic center is the only mosque in the immediate area, Mohamed said. He said the next closest mosque is about a 40-minute drive away, and some elders who live near the Islamic Center of Tacoma don’t have the means to travel there on their own.

Mohamed asked people to pray for the mosque’s community while leaders seek an alternative place for services. “We’re scrambling to make sure that people have a place to pray, whether it’s at a home or somewhere, because services cannot stop,” Mohamed said. “Especially at moments like this is when we get closer to God, not further.”