General
News ID: 3476455
TEHRAN (IQNA) – A golden Quran dating back to the 12th century has been put on display in the 2021 edition of the Sharjah International Book Fair. 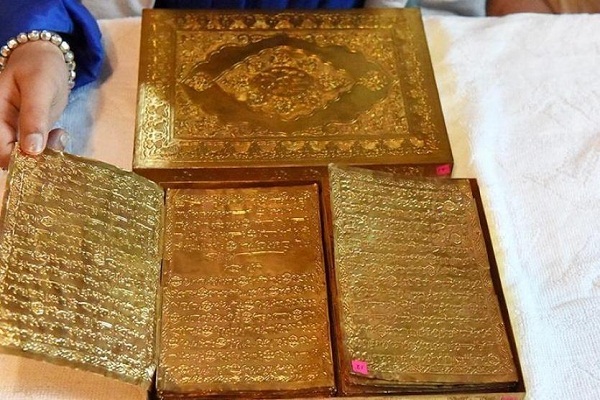 Rare books and historic manuscripts are being showcased in one of the sections of the 41st Sharjah International Book Fair in the United Arab Emirates, Raya reported.

Due to their high values, these works have been put inside glass boxes.

According to officials of the exhibition, this section has managed to attract a significant number of visitors. Some of the works were showcased for the first time.

One of the most prominent works is a Quran written on 24-carat gold. The book dates back to the 12th century and its value is estimated at $500,000.

Also on display is a handwritten Quran worked on a sheet of paper with dimensions of 100 in 60 cm. The letters are so delicate and small that can only be seen from close range.

As one of the world’s largest book fairs, the event kicked off on November 3. The eleven-day fair has over 400 literary events, including daily writing workshops, poetry readings, and book signings. The stalls prominently feature local favorites, including several Arabic books on Sharjah, Arab culture, and Arabic art.