Culture
News ID: 3476746
TEHRAN (IQNA) – Visitors to the Sheikh Zayed Grand Mosque Center (SZGMC) can get a glimpse of the various exhibits that showcase Islamic civilization’s sciences and arts. 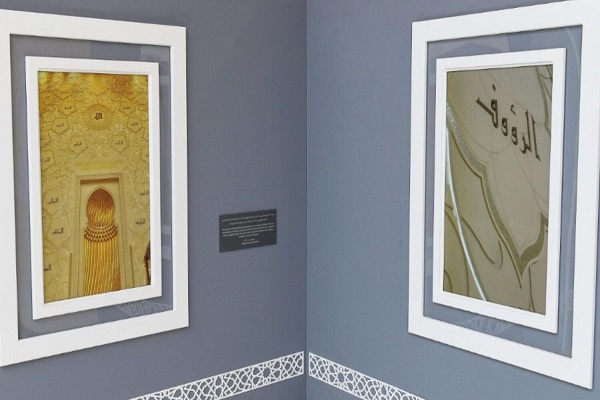 These include rare books on history of Islamic art, various kinds of Arabic calligraphy and photos featuring Islamic art.

The exhibition titled ‘Artistic Characteristics – Elegant Calligraphy and Inspiring Features’, to celebrate the International Day of Islamic Arts, aims to preserve and revive the artistic heritage of Islamic civilization.

Cultural tour guides are at hand to offer detailed explanation and educate them about the architectural features of the Sheikh Zayed Grand Mosque.

Additionally, the exhibition aims to raise awareness on the contribution of Islamic art in preserving human civilization.

The first section of the exhibition ‘Through the Pages of History’ contains a rare collection of books, where visitors learn about the history of Islamic art in different regions of the world, via an interesting journey through the pages of eight books that are amongst the rarest worldwide. These books are considered precious pearls in the curated collection of Al Jami’ library.

The second section ‘Scripts from History’ takes visitors to a world of beautiful Arabic calligraphy. Here one can see samples of the various scripts including Koufi, Thuluth, Moroccan, Muhaqqaq, Diwani, and other artistic scripts created by calligraphers.

They are part of the collection of Mohammed Ahmad Al Murr, an Emirati writer who held various senior positions in the UAE government and is passionate about collecting Arabic and foreign artworks related to Islamic art. He has laid particular emphasis on collecting rare works in Arabic calligraphy.

‘Inspired by Photos’, highlights a number of pictures that feature Islamic art through the lenses of female students from the Higher Colleges of Technology who captured the harmonious and symmetrical Islamic architecture of the Sheikh Zayed Grand Mosque through their highly professional and artistic photos, which in turn, reflects the themes of cultural dialogue.

‘The Language of the Brush’ features artworks by female students of Zayed University, drawing on an unmistakable influence of, and pride in, Islamic art.

The hard classic lines and freehand ones have expressed the feelings behind letters and words in color and meaning.

‘Spaces of Light Photos’ takes visitors to the most creative artwork of both professional and amateur photographers, reflecting the messages and themes of the mosque and the artistic and aesthetic features of the various eras of Islamic architecture.

These photographers endeavored to reflect these features in their contributions to the competition called “Spaces of Light Photography Award” launched by the Mosque under the auspices of Sheikh Mansour Bin Zayed Al Nahyan, Deputy Prime Minister of the UAE and Minister of Presidential Affairs.

The sixth section ‘An Interactive Journey into the Islamic Culture’, includes an interactive screen that takes visitors on a cultural journey to the ‘Coins of Islam: History Revealed’ exhibition, with the aim to revive the history of Islamic arts and their human values that express the center’s message to achieve harmony among people and find a common language for civilizational dialogue.