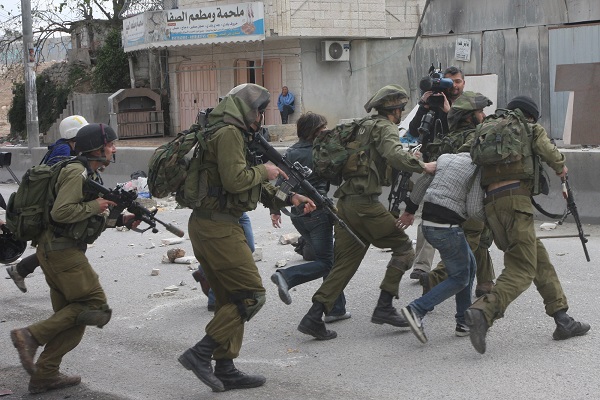 They said Monday that Israeli forces overnight rounded up three Palestinians, including a former prisoner and a university student, from Silwad town, north of Ramallah city.

They also detained another after breaking into and ransacking his house in Burqa town, north of the city.

The soldiers conducted large-scale search campaign in Ni‘lin, Deir Qaddis, Kharbatha Bani Harith and Bil‘in, a cluster of towns located to the West of Ramallah, where they forcibly entered and ransacked a number of houses, turning them upside down.

In Jerusalem, heavily-armed police and intelligence officers barged their way into al-Issawiya, a neighborhood of some 20,000 residents are constantly harassed by the Israeli police and anyone, including children, run the risk of arbitrary arrest, where they thoroughly searched a number of houses and rounded up four others, including an 11-year-old boy.

In Hebron district, the sources confirmed a similar military raid in Dura town, southwest of the city, resulting in the detention of another.

Israeli forces frequently raid Palestinian houses almost on a daily basis across the West Bank on the pretext of searching for "wanted" Palestinians, triggering clashes with residents.

These raids, which take place also in areas under the full control of the Palestinian Authority, are conducted with no need for a search warrant, whenever and wherever the military chooses in keeping with its sweeping arbitrary powers.

Under Israeli military law army commanders have full executive, legislative and judicial authority over 3 million Palestinians living in the West Bank. Palestinians have no say in how this authority is exercised.