General
News ID: 3477811
TEHRAN (IQNA) – An exhibition of rare Quran copies and other manuscripts has been launched in Najaf, Iraq, on the occasion of Imam Ali (AS) birthday. 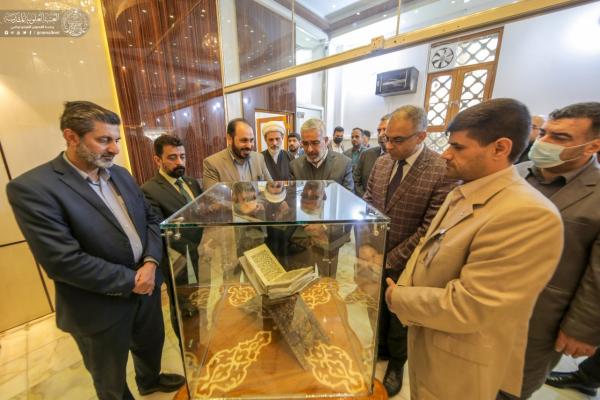 The Astan of Imam Ali (AS) has mounted the expo, which was opened in a ceremony on Sunday, imamali.net website reported.

Old handwritten copies of the Quran, some dating back to the early years after the advent of Islam are among the manuscripts on display at the exhibition, said Sheikh Abdul Sada al-Jaberi, director of the Astan’s Cultural Affairs Department.

One of them is a Mus’haf attributed to Imam Ali (AS) written on the last page of which is “This Mus’haf was inscribed by Ali ibn Abi Talib in the year 40 after Hijra”, al-Jaberi added.

He added that other rare Quran copies on display have been calligraphed by renowned calligraphers of the Muslim world such as Yaqut Musta'simi, Ahmad Suhrawardi, and Ahmad Neyrizi.

Shia Muslims and others celebrate the birth anniversary of Imam Ali (AS) on the 13th day of the lunar month of Rajab (February 15).

Imam Ali (AS) was Prophet Muhammad (PBUH)’s highly revered son-in-law and cousin as well as the first Imam in Shia Islam.

The Imam is respected for his courage, knowledge, belief, honesty, unbending devotion to Islam, deep loyalty to Prophet Muhammad (PBUH), equal treatment of all Muslims and generosity in forgiving his defeated enemies.