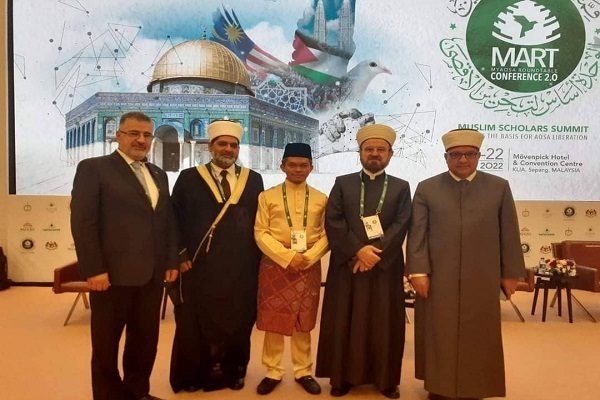 A number of Palestinian officials and scholars are among the participants at the gathering, whose title is “Unity, Basis of Liberation of Al-Quds”, according to Paltoday.ps website.

Sheikh Hatam al-Bakri, the Palestinian Authority’s minister of Awqaf, in an address to the opening ceremony thanked the Malaysian government for organizing the conference and described the event as an important message on Islamic unity and a reminder of the Muslim Ummah’s responsibility about Al-Quds and its sanctities.

He said it is incumbent upon all Muslim countries today to defend the rights of Palestine and mobilize support for Palestinians in confronting the Israeli regime’s attacks on Al-Aqsa Mosque.

Al-Bakri added that it is Al-Quds that brings the Ummah together and is a criterion of victory and dignity.

He further called on Muslim scholars across the world to unite against the Israeli regime’s attacks on Al-Aqsa and fulfil their responsibilities regarding support for Palestine and Al-Quds.

They need to make crucial decisions in backing the Palestinian people whose religious and civilizational identity and their Islamic heritage are under the enemy’s attack, he went on to say.

The international conference will conclude today with the adoption of a final statement.