Hamas Calls for Massive Presence of Palestinians at Al-Aqsa Mosque 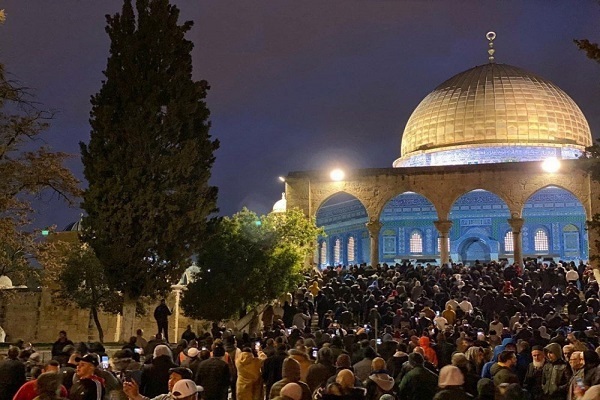 Hamas said in a statement that the massive participation of Palestinian worshippers at the prayers tomorrow morning would showcase the Palestinian nation’s resolve to defend and protect the holy site.

It would also signify the Palestinians’ response to the terrorism of the occupation regime illegal settlers, the statement said.

Hamas added that the Palestinian people will demonstrate that Al-Quds and Al-Aqsa Mosque are the center of confrontation with the Zionist enemy and that they have the responsibility to protect the sacred place.

The resistance group lauded the sacrifices and heroism of the Palestinians in defending Al-Quds and entire Palestine.

It also called on the Arab and Muslim world to support the defenders of Al-Aqsa against occupation and Zionists’ plots.

Tensions have remained high in the occupied Palestinian territories over the past months. The situation is particularly tense in al-Quds, where the al-Aqsa Mosque compound is located.

Israeli settlers frequently storm the al-Aqsa Mosque compound, a move denounced by Muslims as desecration of the holy site.

Israeli troops have on various occasions attacked Palestinian worshipers there.

The desecration of the mosque has drawn widespread condemnation, with Palestinian resistance groups promising a firm response.