General
News ID: 3480143
TEHRAN (IQNA) – The city of Santa Clara in the US state of California declared August as the American Muslim Awareness and Appreciation Month. 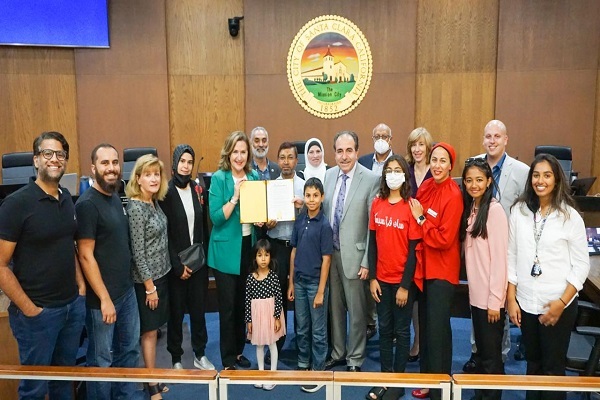 At the August 16 City Council meeting, the City Council proclaimed the month of August American Muslim Awareness and Appreciation Month, which honors the generations of Muslim Americans for their social, cultural, and economic contributions to our City and communities across the country.

In Santa Clara, the community organizations, and mosques, including the Muslim Community Association, provide assistance through funds, food distribution and resources to those in need since the pandemic.

Also, the Council on American-Islamic Relations (known as CAIR) has provided civil rights and immigration services throughout the Bay Area to the city’s Muslim residents.

Samer Darwish, President, and Mohammed Islam, Treasurer from the Muslim Community Association, and Sameena Usma, Senior Government Relations Coordinator from the Council on American-Islamic Relations attended the meeting in person to accept the proclamation.

"American Muslim Appreciation and Awareness Month recognizes the lasting positive impact that American Muslims have made toward the advancement of our state and country ... The City of Santa Clara’s mosques and community organizations have increased efforts to assist people during the pandemic by donating funds, distributing food, or providing other resources to help those struggling; and the Support Life Foundation in partnership Second Harvest Food Bank and Muslim Community Association distributed nearly 3 million pounds of food since the start of the pandemic to at-risk communities in Santa Clara County; and in addition to providing a base for Support Life’s food distribution, the Muslim Community Association (MCA) provides rental and other financial assistance in the millions of dollars yearly that were given by congregation members ... The City of Santa Clara is enriched by the diversity of its residents, and takes great pride in recognizing August as American Muslim Appreciation and Awareness Month in honor of the rich history, cultural traditions, and significant contributions that Muslim Americans have brought to the Santa Clara community," read the proclamation.