General
The link was copied
News ID: 3481464
TEHRAN (IQNA) – Israeli forces have killed four Palestinians during in the occupied West Bank, in the latest confrontation that has made 2022 the deadliest year of violence in the occupied territories in nearly a decade. 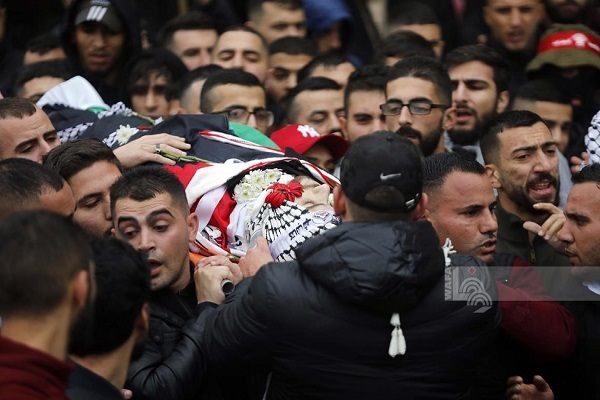 The fatalities included two Palestinian brothers, identified by Palestinian Ministry of Health as 22-year-old Jawad and Thafer Abdul Rahman Rimawi, 21, stating that the two siblings were fatally shot after soldiers stormed the village of Kafr Ein, located northwest of Ramallah, on Tuesday morning, according to the official Palestinian news agency Wafa.

Another Palestinian man fell victim to Israeli violence in the occupied West Bank on Tuesday. Israeli forces shot dead the man in an alleged car ramming near Ramallah.

The 44-year-old was shot in the head and died as Israeli soldiers and stone-throwing Palestinians engaged in skirmishes.

Nine others were shot by live bullets as well. One was hit in the chest while the rest were struck in the upper and lower parts of their bodies. They were taken to nearby hospitals, and are said to be in stable condition.

Hamas: Israeli crimes will be met with upsurge in retaliatory attacks

The Palestinian Hamas resistance movement has strongly denounced the death of three Palestinians on Tuesday, including the two brothers, during Israeli military raids across the West Bank, stating that the Tel Aviv regime’s crimes will be met with an upsurge in retaliatory attacks and acts of resistance.

Hazem Qassem, a spokesman for the Gaza-based group, said the occupying Israeli regime is desperately seeking to suffocate the legitimate struggle of the Palestinian nation to recover their land and enjoy freedom by means of killings and assassinations.

He stressed that the blood of martyrs will fuel the Palestinian nation’s ongoing popular uprising against the Israeli occupation.
Israeli forces have recently been conducting overnight raids and killings in the northern occupied West Bank, mainly in the cities of Jenin and Nablus, where new groups of Palestinian resistance fighters have been formed.

Since the start of 2022, Israeli troops have killed more than 200 Palestinians, including more than 50 children, in the occupied West Bank and East al-Quds as well as the besieged Gaza Strip.

According to the United Nations, the number of Palestinians killed by Israel in the occupied West Bank this year is the highest in 16 years.