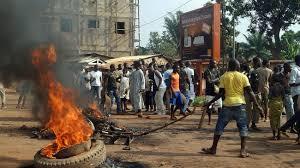 "Although violence has hit all communities in CAR, most of the people who are trapped are Muslims under threat from anti-balaka militiamen," Edwards said.

According to the UN refugee agency, the crisis has driven around one million people from their homes.

Most of them are staying at make-shift camps. However, these camps are now surrounded by anti-Balaka militants.