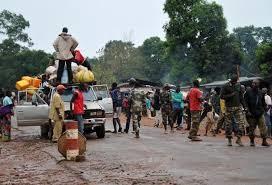 The three Muslim youth were on their way to an inter-religious program in the capital city of Bangui, according to letempsdz website.
Anti-Balaka extremists blocked their way and after torturing and killing them mutilated their bodies.
Organizers of the interfaith program said the three young Muslims were from the PK5 neighborhood of Bangui.
Their mutilated bodies were taken to the neighborhood's mosque to be later buried in the Muslim district of the city.
Meanwhile, Sebastien Wenezoui, a coordinator of the anti-Balaka, said he is unaware of the identity of those who carried out the crime, adding "We strongly condemn these acts. While we are currently working towards peace, others continue to kill."
The Central African Republic descended into chaos last December when Christian armed groups launched coordinated attacks against the mostly Muslim Seleka group, which had toppled the government in March 2013.
In recent months, Christian militiamen have been raging violence against the Muslim minority in the CAR, killing thousands of them and displacing many more.