Palestinians Call for Protection of Al-Aqsa Mosque Against Israeli Attacks

Social
News ID: 2885859
TEHRAN (IQNA) - Several Palestinian families from the holy city of Jerusalem al-Quds have called for continuous visits of Muslims to the al-Aqsa Mosque, urging Muslim worshipers to increase their presence in the holy Muslim site in the face of the brutal Israeli aggression and frequent raids by the settlers. 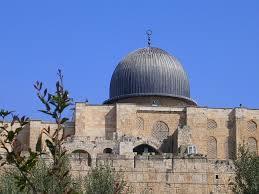 Israeli forces have lately adopted strict measures against Palestinians’ visits to the a-Aqsa Mosque. Many of the worshippers have been arrested or beaten by Israeli forces. Meanwhile, others have been repeatedly prevented from entering the mosque compound. This is why the guards of al-Aqsa Mosque have called on all Palestinians who manage to visit Jerusalem/al-Quds not to leave the al-Aqsa Mosque for the Israeli attacks.
Protection of the al-Aqsa Mosque usually falls on men and women stationed in the compound of Al-Aqsa Mosque, who is known in Arabic as “Mourabitoun.” They spend their time at the mosque to pray and read the Holy Quran, and prevent extremist Israeli settlers from storming the site.
Many residents of Jerusalem /al-Quds want all Palestinians who manage to come to the holy city, to visit the al-Aqsa Mosque and to support the worshipers in their battle to preserve the site and its Islamic identity.
Source: Press TV