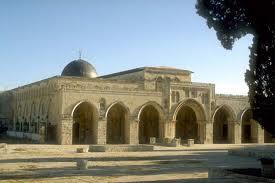 The Zionist regime’s authorities are trying to impose a new fait accompli by allowing Israeli settlers to repeatedly force their way into Al-Aqsa Mosque complex, Hamas said in a statement.
Israel is trying to exploit the Arab world's preoccupation with its domestic problems to divide up Al-Aqsa Mosque complex and continue with its Judaization, Hamas said, al-Bawaba news website reported.

The Palestinian faction went on to reiterate that Al-Aqsa Mosque was at the heart of the conflict between the Arabs and Israel and that the responsibility of defending it fell on the shoulders of Palestinian resistance factions.

It annexed the entire city in 1980, claiming it as the capital of the self-proclaimed Jewish state – a move never recognized by the international community.

In September 2000, a visit to Al-Aqsa by controversial Israeli politician Ariel Sharon sparked what later became known as the "Second Intifada," a popular uprising against Israel's decades-long occupation in which thousands of Palestinians were killed.