Social
News ID: 3459677
TEHRAN (IQNA) – First, a voice softly repeated the Arabic words "Allahu Akbar," or "God is great." Then, the sound of rustling spread across a University of Central Florida lawn Friday as 100 Muslim students knelt in prayer. 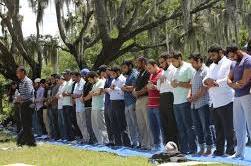 Otherwise, all was quiet outside the John C. Hitt Library.

"Prayer is one of the most peaceful and beautiful things," said Mohamed Mohamed, a senior biomedical sciences major who led the outdoor service.

The subdued gathering formed a contrast with the disruption of Tuesday, when inaccurate reports of a "Middle Eastern" person with a gun prompted the library's evacuation. Teachers locked classroom doors. Social media lit up with posts about a distraught armed Muslim girl in the library stairwell.

Members of the Muslim Student Association at UCF said the response to the false rumors sheds light on misconceptions and stereotypes that some have about Islam. By holding their prayers outside as non-Muslims made their way to and from class, group members said they hoped to dispel some of these fears.

"Maybe coming out here and having people actually see us pray…they'll realize 'these guys are just like us,'" said Maha Qureshi, incoming president of association. "There's nothing to be so afraid of."

The 22-year-old senior said she doesn't know the identity of the Muslim student spotted in the stairwell earlier this week. A 911 caller reported the girl was wearing a "burqa" or "hijab," was acting "panicky" and was possibly holding a gun. Other emergency callers reported seeing social-media posts about a Muslim student with a gun in the library.

However, Qureshi and other Muslim Student Association members think the girl in the stairwell might have been praying. Observant Muslims pray five times each day, and freshman Tasnim Mellouli said until UCF opened a prayer room earlier this year she'd also seek out quiet stairwells.

"Prayer…is integral to our faith," said Mellouli, 19. "When we're seen as a threat when we're doing that, it's very hurtful. And honestly, it's kind of disturbing."

After evacuating and searching the library Tuesday, authorities found no one with a gun. The only shot fired at the scene was discharged accidentally by a police officer putting his AR-15 inside his car. No one was injured.

On top of concern about how the reports surfaced, Muslim students also objected to UCF'S alert, which warned of a possible "Middle Eastern" gunman or gunwoman.

"Middle Eastern isn't really an ethnicity," Qureshi said. "How do you instantly call someone 'Middle Eastern' but you don't know their gender?"

UCF Police Chief Richard Beary later said he was sorry if the alert was objectionable to some, but it was not meant to be insensitive. Emergency dispatchers were simply doing their best to put out a description, he said.

"We're here at university. We're here to learn," he said.