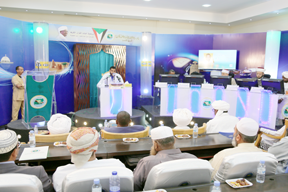 The contest, known as the Khartoum Prize, has been organized by the Sudan Quran Society.

According to the society’s website, a number of Quranic, religious, and cultural officials attended the opening ceremony on Saturday.

The competition will run until Wednesday, January 11, at the Dar-ol-Quran Hall in the Sudanese capital.

It is being held in the category of memorization of the entire Quran in two separate sections, one for men and the other for women.

74 Quran memorizers from 55 Muslim and non-Muslim countries are competing for the top prizes at the international Quranic event.

The panel of judges is made up of five Quran experts, one from Egypt, one from Yemen, one from Lebanon, and two from the host country.

Mohammad Khakpour is representing the Islamic Republic of Iran in the men’s section of the competition.