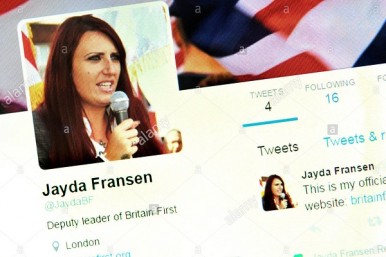 Fransen's account was banned on Monday along with a number of other far-right individuals as the social media company introduced a new policy on hate speech.

The official Britain First Twitter account, that of its leader Paul Golding, the American white nationalist Jared Taylor and the American Nazi party were also suspended in a major crackdown. Twitter has been repeatedly criticised for failing to deal with abuse and hate speech online, but has vowed to do more in recent months.

In November, Fransen posted three unverified anti-Muslim videos including ones titled "Muslim Destroys a Statue of Virgin Mary!" and "Muslim migrant beats up Dutch boy on crutches!" They were retweeted by the US president, leading to international condemnation, including from British Prime Minister Theresa May.

The incident threatened to imperil US-UK relations when Trump then hit back at the Prime Minister. "Theresa, don’t focus on me, focus on the destructive Radical Islamic Terrorism that is taking place within the United Kingdom. We are doing just fine!" he wrote at the time.

Suspending an account means all of their tweets are deleted. The profile itself is no longer available and the retweets no longer show up on Trump's timeline.

Twitter had faced criticism not only because the accounts remained online, but because they were verified, receiving a blue tick that confirms their identity and has been seen as a mark of endorsement.

"Today, we are starting to enforce these policies across Twitter. In our efforts to be more aggressive here, we may make some mistakes and are working on a robust appeals process. We’ll evaluate and iterate on these changes in the coming days and weeks, and will keep you posted on progress along the way," Twitter said.