General
News ID: 3466429
TEHRAN (IQNA) – An international flotilla, meant to draw the world's attention to the suffering of Palestinians under an inhumane Israeli blockade on the Gaza Strip, is nearing the coastal enclave's waters. 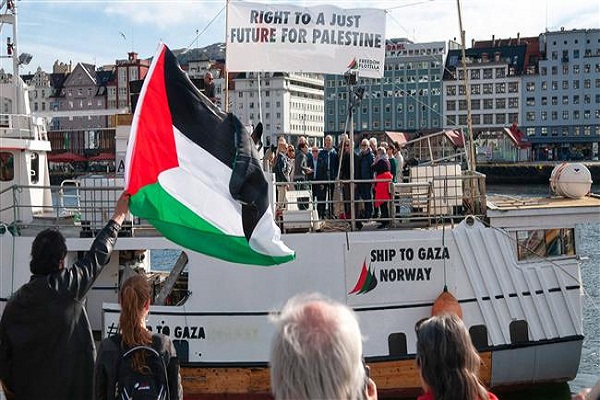 Pierre Stambul, co-president of the French Jewish Union for Peace, told AFP that one of the three vessels in the "Freedom Flotilla," called al-Awda in Arabic (the return), may arrive off Gaza shores as early as Sunday.

About 40 activists from 15 countries are on board the vessels, which left the Italian city of Palermo on July 21.

The Gaza Strip has been under a crippling Israeli siege since 2007 and has witnessed three wars. The Israeli regime also carries out regular air raids on the coastal enclave under the pretext of hitting positions belonging to the Palestinian resistance movement Hamas.

Egypt closely cooperates with Israel in maintaining the siege by keeping Rafah, Gaza’s only land terminal that bypasses Israel, closed most of the time.

Zaher Birawi, head of the International Committee for Breaking the Siege of Gaza, confirmed that the flotilla had crossed into Egyptian waters and was expected to reach Gaza’s territorial waters on Sunday, Press TV reported.

Press TV's correspondent Richard Sudan, who is on board the flotilla, said in a video posed online that one of the vessels had dropped out with an unspecified "problem" and that two boats were now making their way toward Gaza.

European activists and a Jordanian lawmaker are on board al-Awda, which is also carrying medical aid for Gaza residents, he added.

However, the Israeli navy is expected to prevent the ships from reaching Gaza shores as was the case with previous attempts by pro-Palestine activists.

The activists stressed that they will resist Israel's expected takeover of the boats in non-violent ways, reports said.

Back in May 2010, an Israeli raid on a Gaza-bound aid flotilla, called Mavi Marmara, killed 10 Turkish activists in high seas and sent Ankara-Tel Aviv ties into a tailspin.

The two sides normalized relations in June 2016, but their ties sank to a fresh low in May 2018 after the expelling of envoys amid growing tensions over the killing of dozens of Palestinians in the Gaza Strip at the hands of Israeli forces.

Tensions have been running high near the Gaza fence since March 30, which marked the start of a series of protests, dubbed “The Great March of Return,” demanding the right to return for those driven out of their homeland.

The Gaza clashes reached their peak on May 14, the eve of the 70th anniversary of Nakba Day (the Day of Catastrophe), which coincided this year with the US embassy relocation from Tel Aviv to the occupied Jerusalem al-Quds.