General
News ID: 3466462
TEHRAN (IQNA) – Norway’s Foreign Ministry called on the regime in Israel to explain the legal grounds on which it seized a Norwegian-flagged boat taking humanitarian aid supplies to the Tel Aviv-blockaded Gaza Strip. 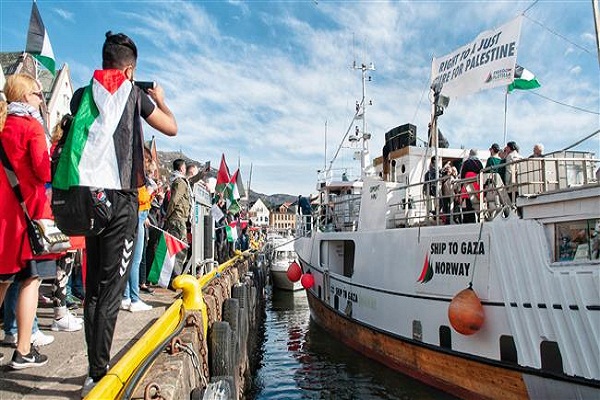 “We have asked the Israeli authorities to clarify the circumstances around the seizure of the vessel and the legal basis for the intervention,” a ministry spokesman said on Tuesday, Reuters reported.

The Israeli navy intercepted the vessel al-Awda (Return) some 60 nautical miles off the coast in international waters on Sunday.

The captain was struck on the head by the forces, who had ordered him to sail to the coastline of the Israeli-occupied territories instead, said Torstein Dahle, the head of Ship to Gaza Norway, which had organized the trip.

The ministry said that its diplomatic mission in Israel was trying to secure the release of five Norwegians who were sailing on board the vessel among 22 others. Two Israelis on board were, however, quickly released.

A spokesman for Israel’s ministry for foreign affairs declined to comment on the matter.

Dahle said al-Awda was the first Norwegian aid vessel to try to break Israel’s siege of the territory that has been in place since 2007.

“This is a peaceful boat; it’s impossible that it can threaten Israel’s security,” he said.

The intercepted vessel is one of four ships that make up Freedom Flotilla, an international coalition seeking to take aid to Gaza despite the siege.

A Swedish-flagged boat from the flotilla is now reportedly on its way to the coastal strip.

In May 2010, an Israeli raid on a similar flotilla, comprising six civilian ships, killed 10 Turkish activists in the high seas. The incident outraged the international community.

Israel enforces the blockade claiming that it prevents arms smuggling to the Palestinian resistance movement of Hamas.

Under the blockade, Gaza, which hosts some two million Palestinians, has suffered an economic and humanitarian crisis. The United Nations has warned that the overall conditions could render the territory “uninhabitable” by 2020.