General
News ID: 3466587
TEHRAN (IQNA) – Muslims in Iran and a number of other countries on Wednesday celebrated Eid al-Adha (Feast of Sacrifice), one of the most important festivals on the Islamic calendar. 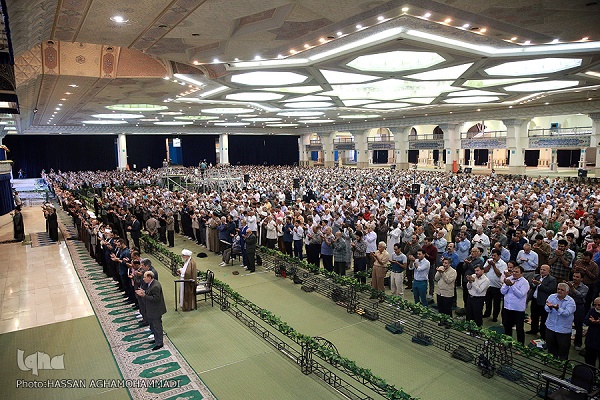 Many other Muslim countries, including Saudi Arabia, celebrated the Eid on Tuesday.

On this occasion, people crowded mosques across the country to perform prayers and sacrifice animals.

The faithful slaughter sheep and goats to commemorate Prophet Abraham’s (PBUH) submission to divine order to sacrifice his son, Ismail (AS), a supreme act of faith.

Just before sacrificing his son, God provided Prophet Abraham with a ram to sacrifice instead after he successfully passed the test of subservience to the Almighty.

The meat of the sacrificed animal is shared among family members and friends, and also donated to the poor.

He hoped that Muslims could help eliminate “the violence and extremism” gripping the world today by resorting to Islamic teachings and promote “peace, tranquility, justice, fraternity and friendship.”

Eid al-Adha is commemorated towards the end of the annual Hajj pilgrimage, which should be undertaken at least once by every able-bodied Muslim who can afford to do so.

This year’s Hajj drew more than 2.37 million pilgrims, including some 86,000 Iranians, to the holy sites of Mecca and Medina in Saudi Arabia.