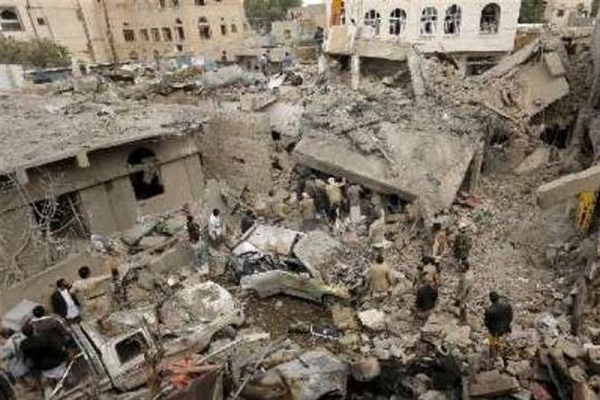 In a damning report on Tuesday, the UN said air attacks had caused the most direct civilian casualties in the war, and a blockade of Yemeni ports and airspace may have violated international humanitarian law.

The alliance, which has been at war with Houthi rebels since March 2015, has repeatedly denied allegations of war crimes, and claims its attacks are not directed at civilians.

However, data collected by Al Jazeera and the Yemen Data Project, has found that almost one-third of the 16,000 air raids carried out in the country have hit non-military sites.

The attacks have targeted weddings and hospitals, as well as water and electricity plants, killing and wounding thousands.

The charity Save the Children has estimated that an average of 130 children die every day from extreme hunger and disease - a crisis brought about by the conflict.

And according to the UN, at least 10,000 people have been killed since the start of the conflict. However, analysts say the death toll is likely to be higher.

'Violations continue to be perpetrated'

"The group of experts has reason to believe the government of Yemen, Saudi Arabia, and the UAE, are responsible for violations of human rights," said Kamel Jendoubi, the chair of the Group of International and Regional Eminent Experts on Yemen.

"Violations and crimes have been perpetrated and continue to be perpetrated in Yemen by the parties to the conflict.

"Members of the government of Yemen and the [Saudi-UAE] coalition may have conducted attacks that were disproportionate and could constitute war crimes," said Jendoubi.

"They may have committed acts that could constitute war crimes such as mistreatment, torture, attacks on peoples' dignity, rape, recruitment, and enrollment of children under the age of 15 in the hostilities."

The experts urged the international community to "refrain from providing arms that could be used in the conflict "- an apparent reference to countries like the United States and Britain, which supply the Saudi-UAE alliance.

Despite repeated petitions by human rights groups, the US assists Saudi Arabia and the UAE in "conducting aerial bombings in Yemen" and provides "midair refueling services" for their warplanes.

Between 2010 and 2015, Washington also sold more than $90bn of military equipment to Riyadh.

But following a recent air attack on a school bus that killed 40 children, individual members of Congress called on the US military to clarify its role in the war and investigate whether support for the air raids could render American military personnel "liable under the war crimes act".

'No light at the end of the tunnel'

The experts also criticized work by the alliance's Joint Incidents Assessment Team (JIATY), which was set up as a bulwark against possible rights violations.

They questioned the JIAT's explanations for the air attacks that have killed civilians, and challenged its "independence and its ability to carry out impartial investigations."

The experts also said nearly a dozen deadly air attacks they investigated over the last year "raise serious questions about the targeting process applied by the coalition."

They chastised some in-the-field coalition combatants for "routinely" failing to seek information about official "no-strike" lists that should have been avoided.

"Despite the severity of the situation we continue to see a complete disregard for the people in Yemen," said Charles Garraway, one of the authors of the report

"This conflict has reached its peak, with no apparent sight of light at the end of the tunnel.

"It is indeed, a forgotten crisis."