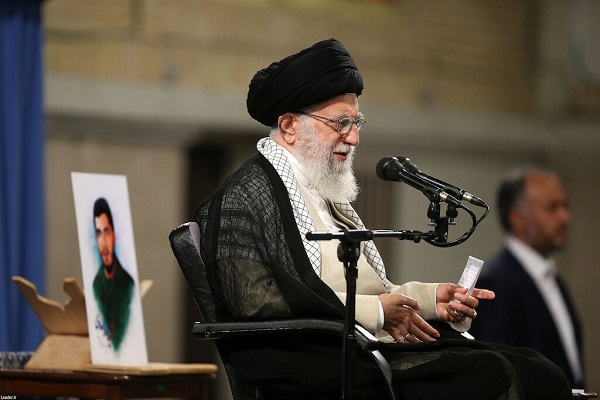 Speaking in a meeting of a group of university students and representatives of students associations in Tehran on Wednesday, Ayatollah Khamenei responded to a question posed by a student in whether the country’s problems are a result of mismanagement or the structure of the establishment by asserting: One of the speakers asked whether these shortcomings in the management of the country are due to the structure of the establishment or [malfunctioning of] the officials. The structure of the constitution is a good one. Of course, structures can be improved and modified in order for the shortcomings to be eliminated. For instance, once we did not have the Expediency Council but today we have it. This is true for all governments. Thus, the structure is not faulty, however, it needs modifications.

His Eminence went on to say: Yet, we as the executives are faulty; we have shortcomings and inabilities. Sometimes, the executives make a mistake that can create a big gap in society.

There has of course been grave mistakes in privatization and I have put in notices several times. There are problems related to privatization. But the principle of privatization is an essential necessity of the economy. This was one of the structural problems that has been modified.

His Eminence further added: Read the letter regarding the JCPOA and the conditions set for its ratification. But if these conditions were not met, the Leader is not in charge of intervention.

The Leader of the Islamic Revolution reminded his audience that His Eminence did not approve of the JCPOA but allowed for the negotiations and held: But the way the JCPOA was handled, I did not really believe in it, and mentioned this to the president and the foreign minister and had warned them several times.

Referring to a declaration of the Second Phase of the Islamic Revolution issued by Ayatollah Khamenei in February, the Leader made 4 essential points to be taken heed of by the youth and said: The main four points that were emphasized in the statement consisted of: the greatness of the revolution and its persistence; the importance of the work done, and the revolution's functions so far; the future of the revolution; and the significance of the role young and committed forces can play.

Ayatollah Khamenei invited the nation to take promising measures towards a brighter future for Iran and said: We need a public movement in order to reach the envisaged future. The committed youth will naturally act as the main players for carrying out this movement. The young people are not necessarily 22 to 25; by youth, I mean the people in their thirties and forties, too. They can make a huge difference in the country's governing system.

His Eminence urged the young generation of the country to launch an upright movement for the progress of the nation and recommend: Prepare the grounds for the formation of a young and pious government. We expect you, the university students, to be self-organized and self-motivated. Like when we acted self-motivatedly during the tyrannical rule of Pahlavis. Do not wait for others to get you involved.

Imam Khamenei recalled the resistance formed against the Pahlavi regime and described it as a model to be adopted by the young generation today, saying: At that time, no one was leading us; at times a new announcement reached us from Imam Khomeini, which motivated us.

The Leader of the Islamic Revolution praised the dedication of the revolutionaries despite the many obstacles in their way towards victory and held: There were many obstacles; we were beaten, imprisoned, starved and there were economic obstacles. The youth should act in the same manner today. If you act as such, the soft conspiracies of the enemy, the most important one of which is paralyzing the young generation, will be annulled.

Finally, His Eminence gave tidings to the youth that they can surely overcome problems and asserted: If you the youth advance in this manner, and prepare the ground for the formation of a young and pious government, your grieves will be over, and these grieves are not only yours.