General
News ID: 3469639
TEHRAN (IQNA) – The Dar-ol-Quran of Imam Ali’s (AS) holy shrine has organized 10 Quranic circles for women pilgrims on the occasion of Arbaeen pilgrimage. 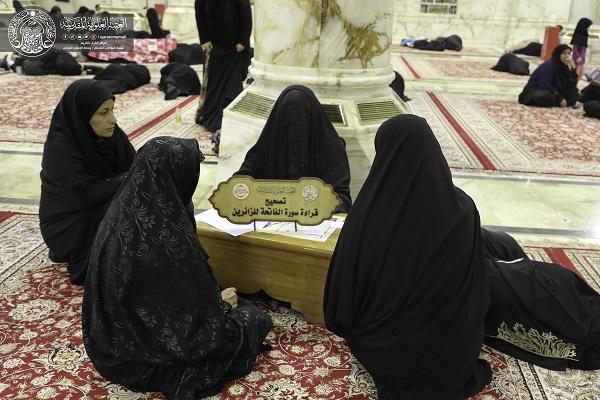 According to quran.imamali.net, Marziyeh Heydar, head of the women section of the Dar-ol-Quran, said that the circles provide an opportunity for the women to check their Quran reading skills, particularly the reading of Surah Fatiha and other short Surahs of Quran.

The Hazrat Fatemeh Zahra (SA) Hall as well as some other parts of the holy mausoleum host the circles, she said.

The Dar-ol-Quran has annually implemented the Quranic plan since eight years ago and it has set up about 250 Quranic booths in 14 provinces of Iraq this year on the path of pilgrims marching towards the holy city of Karbala for Arbaeen.

Arbaeen, which is one of the largest religious gatherings in the world, comes 40 days after Ashura, the martyrdom anniversary of Imam Hussein (AS) and his companions in the 680AD Battle of Karbala.

Each year, a huge crowd of Shias, including many Iranians, flock to Karbala, where the holy shrine of Imam Hussein (AS) is located, to perform mourning rites on Arbaeen.