General
News ID: 3470088
TEHRAN (IQNA) – Myanmar leader Aung San Suu Kyi on Wednesday rejected accusations of genocide committed against her country’s Muslim Rohingya minority as “incomplete and misleading”, and said the case should not be heard by the UN’s highest court. 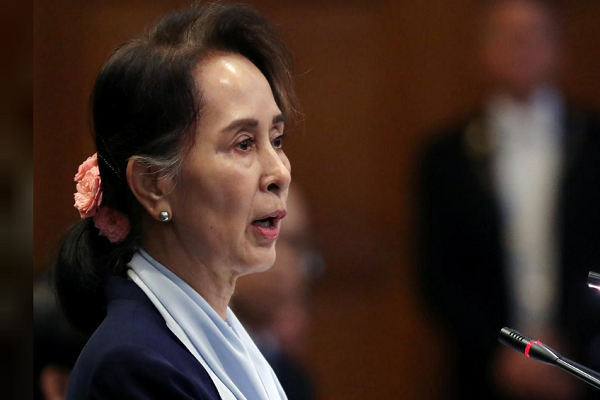 The Nobel Peace laureate, speaking during three days of hearings at the International Court of Justice, challenged allegations in a lawsuit brought by Gambia last month accusing Myanmar of violating the 1948 Genocide Convention.

Suu Kyi, once feted in the West as a heroine of democracy, spoke for about 30 minutes at the courtroom in The Hague in defense of the actions of the Myanmar military that for years had kept her under house arrest.

She said a military-led “clearance operation” in western Rakhine State launched in August 2017 was a counterterrorism response to coordinated Rohingya militant attacks against dozens of police stations.

“Gambia has placed an incomplete and misleading picture of the factual situation in Rakhine state in Myanmar,” she said.

More than 730,000 Rohingya fled Myanmar to Bangladesh after the military launched its crackdown. United Nations investigators have said 10,000 people may have been killed.

Rights groups said Suu Kyi’s statement contradicted evidence on the ground and witness accounts. Her remarks “fly in the face of all the evidence gathered by the UN, and the testimony our own teams have heard from countless survivors,” said George Graham, director of humanitarian advocacy at Save the Children

Gambia has argued it is every country’s duty under the convention to prevent a genocide from taking place, or to punish those responsible.

While Suu Kyi conceded that disproportionate military force may have been used and civilians killed, she said the acts did not constitute genocide. And she argued Myanmar was taking steps to punish soldiers responsible for what it has previously said were isolated cases of wrongdoing.

“Surely, under the circumstances, genocidal intent cannot be the only hypothesis,” she told the panel of 17 judges. “Can there be genocidal intent on the part of a state that actively investigates, prosecutes and punishes soldiers and officers that are accused of wrongdoing?”

Last year, Myanmar’s military announced seven soldiers involved in a massacre of 10 Rohingya men and boys in the village of Inn Din in September 2017 had been sentenced to “10 years in prison with hard labor in a remote area”. They were granted early release after less than a year in the prison.

Late last month, the military said it had begun a court martial of an unspecified number of soldiers over events in another village, Gu Dar Pyin, the site of a second alleged massacre of 10 Rohingya.

Judges this week are hearing the first phase of the case: Gambia’s request for “provisional measures” - the equivalent of a restraining order against Myanmar to protect the Rohingya population until the case is heard in full.

The tribunal has no enforcement powers, but its rulings are final and carry significant international weight.

The legal threshold for a finding of genocide is high. Just three cases have been recognized under international law since World War Two: In Cambodia in the late 1970s; In Rwanda in 1994; and at Srebrenica, Bosnia, in 1995.

Although a U.N. fact-finding mission found that “the gravest crimes under international law” had been committed in Myanmar and called for genocide trials, no court has previously weighed evidence.

Myanmar lawyer William Schabas appealed to the court to reject the demand for an injunction and said the court did not have jurisdiction.

He argued the reported number of 10,000 deaths in Rakhine did not meet a threshold for genocide, which requires that a specific ethnic group is destroyed in whole or in part.

The case is being followed closely across Rakhine state’s border in Bangladesh, where more than 1 million Rohingya are now crowded into the world’s biggest refugee camp.

“She is a liar. A great liar, shame on her,” said Abdur Rahim, 52, while watching a live telecast of her testimony at a community center in the Kutupalong camp.

Meanwhile in Myanmar’s commercial capital Yangon, where there have been demonstrations in support of Suu Kyi in recent days, several hundred people, including monks and government staff, watched a live broadcast of the hearings in a park. Some recorded her comments on their phones.

“The lawyers on Myanmar’s side are brilliant. Since it’s about the truth, the lawyers seem so confident. They are telling the truth,” said Khin Nu, 62.

Suu Kyi came to power in 2016 following a landslide election win, but a military-drafted constitution means she must share power with the army that ruled the Southeast Asian nation for decades.