Leader: US Taking Revenge on Iraq’s PMU for Defeating Daesh 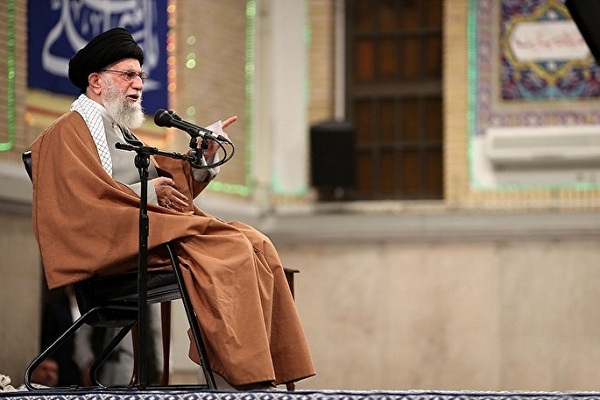 “Look at what the US is doing in Iraq and Syria. They’re taking revenge on Hashd al-Sha’abi (PMU) for defeating Daesh. Since Hashd al-Sha’abi crippled and destroyed Daesh—which the US had created—they’re taking revenge,” the Leader said on Wednesday in a gathering of thousands of nurses from across the country on the occasion of the auspicious birth of Hazrat Zeynab (SA), Khamenei.ir website reported.

“The Iranian government the Iranian nation and I strongly condemn the US’s malice,” Ayatollah Khamenei added.

“That guy [Donald Trump] has tweeted that we see Iran responsible for the events in Baghdad and we will respond to Iran. Firstly, you can’t do anything and, secondly, if you were logical —which you’re not— you’d see that your crimes in Iraq, Afghanistan… have made nations hate you.

“If the Islamic Republic decides to challenge and fight, it will do so unequivocally. We’re not after wars, but we strongly defend the Iranian nation’s interests, dignity and glory. If anyone threatens that, we will unhesitatingly confront and strike them.”

On Tuesday, dozens of protesters broke into the US embassy compound in Iraqi capital Baghdad after smashing a main door and setting fire to a reception area, prompting tear gas and sounds of gunfire.

It came after US forces on Sunday conducted drone strikes on a number of Kata’ib Hezbollah bases in Iraq’s western Anbar province, killing at least 27 members of the group and wounding many others.

Kata’ib Hezbollah is part of the Hashd al-Shaabi. The PMU played a key role in defeating the Daesh terrorist group that had occupied parts of Iraq since 2014.