General
News ID: 3470541
TEHRAN (IQNA) – Israel’s warplanes have launched new airstrikes on the besieged Gaza Strip amid escalating tensions in the region over the US President Donald Trump’s so-called deal of the century on Israeli-Palestinian conflict. 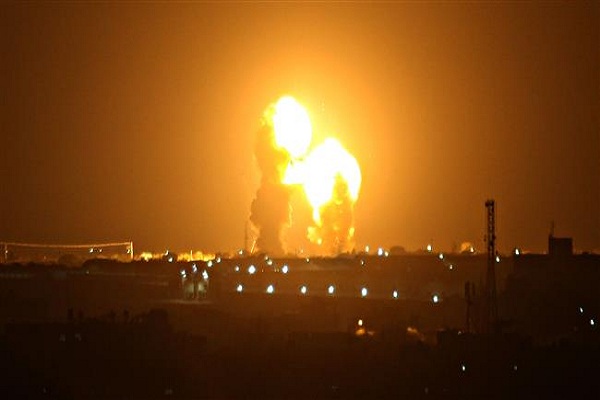 Media sources in Palestine said the airstrikes on Tuesday targeted a position belonging to the Palestinian Hamas resistance movement in the city of Rafah, south of the coastal enclave.

Israel has carried out a number of airstrikes on Gaza in the past few days, with Palestinians having responded by launching several rockets into the occupied territories.

Tel Aviv claims the attacks are in retaliation for Hamas' alleged launch of "incendiary balloons" allegedly directed toward the occupied territories.

Since 2008, Israel has waged three wars against Gaza, where about two million Palestinians live under a 12-year Israeli blockade. Thousands of Gazans have been killed in each of these deadly wars

Tensions have escalated in the region since US President Donald Trump unveiled his so-called Middle East peace plan last Tuesday.

The scheme — which all Palestinian groups have unanimously rejected — largely meets Israel’s demands in the decades-old conflict, while creating a Palestinian state with limited control over its own security and borders.

It enshrines Jerusalem al-Quds as “Israel’s undivided capital” and allows the regime to annex settlements in the occupied West Bank and the Jordan Valley, among other controversial terms.

Palestinian leaders, who severed all ties with Washington in late 2017 after Trump recognized Jerusalem al-Quds as the capital of the Israeli regime, immediately rejected the plan, with Palestinian President Mahmoud Abbas saying it “belongs to the dustbin of history.”

Thousands of Palestinians in the occupied West Bank and besieged Gaza Strip poured out onto the street in immediate condemnation of the plan.

The resolution “stresses the illegality of the annexation of any part” of occupied Palestinian territories and “condemns recent statements calling for annexation by Israel” of these territories, according to the draft seen by Reuters.

The draft text, circulated to council members by Tunisia and Indonesia, would seemingly face a US veto.

Diplomats said negotiations on the text would likely begin later this week and the Palestinian president is expected to speak to the council next week about the plan, which would possibly coincide with a vote on the draft resolution.

Currently more than 600,000 Israelis live in over 230 settlements built since the 1967 Israeli occupation of the Palestinian territories of the West Bank and East Jerusalem al-Quds.

The Israeli settlements are illegal under international law and have been condemned almost unanimously by the international community.