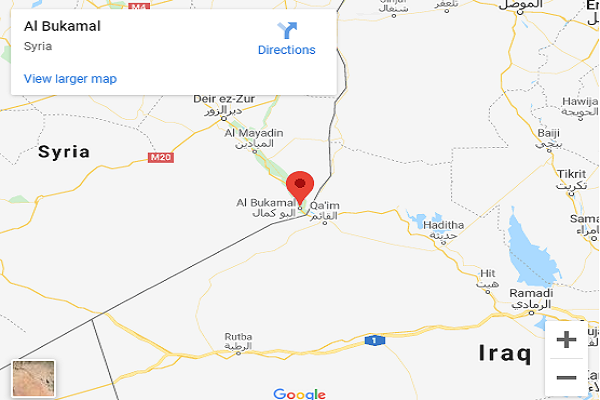 Syrian media said unidentified jets hit targets southeast of the Syrian town of al-Bukamal along the border with Iraq in the early hours of Thursday morning.

Reports said at least 18 Iraqi popular forces were killed in the border area in eastern Syria.

Meanwhile, multiple reports by local media said that an area in Iraq’s Anbar province, on the border with Syria, also came under attack by unidentified warplanes.

The attacks came shortly after the US-led coalition confirmed three of its personnel - two Americans and one Briton - had been killed in a rocket attack on the Taji military camp in Iraq.

Several sources reported that the strikes on the Syrian and Iraqi territory were launched by the US in retaliation for the attack on the Iraqi base, and targeted the positions of Iraq’s Popular Mobilization Units in Anbar, RT reported.

In a statement, the US-led coalition said the Taji base north of Baghdad was targeted with about 18 Katyusha rockets. It added that about a dozen coalition personnel were also wounded in the raid.

"The attack is under investigation by the coalition and Iraqi security forces," the military coalition said.

Earlier, the Iraqi Interior Ministry's Security Media Cell announced in a statement that the incident took place in the evening when 10 rockets landed on Camp Taji, located some 30 kilometers (18.6 miles) north of Baghdad.

The statement added that a Kia Bongo pickup truck with a missile launcher was found south of Baghdad's al-Rashidiya district. It had three missiles in its back.

Anti-American sentiment has been running high in Iraq following the assassination of Lieutenant General Qassem Soleimani, the commander of the IRGC's Quds Force, along with the deputy head of the PMU, Abu Mahdi al-Muhandis, and their companions in US airstrike authorized by President Donald Trump near Baghdad International Airport on January 3.

0
LIKE
Error Report
Related News
US Coalition Base in Baghdad Hit by Rockets
Huge Rally Held in Najaf against US Military Presence
Tags: Syria ، Iraq ، PMU ، air raid
Your Comment