General
News ID: 3471040
TEHRAN (IQNA) – Some 100 mosques in Germany and the Netherlands on Friday rang out with the sound of the call to prayer, as a gesture of support for Muslims amid the coronavirus pandemic. 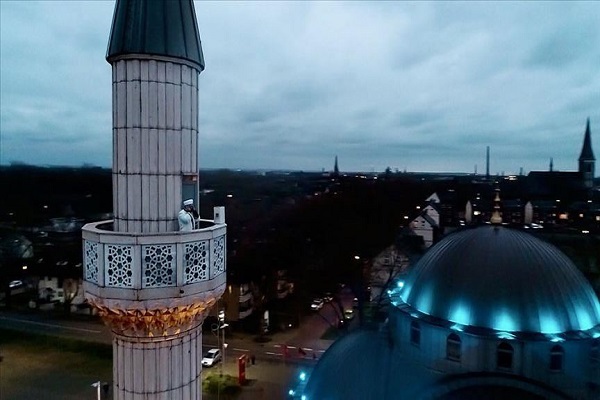 The call to prayer (adhan) was chanted from mosques belonging to the Turkish-Muslim umbrella group DITIB, and the Islamic Community National View (IGMG), one of Germany’s largest Muslim-Turkish associations.

Fahrettin Alptekin, a DITIB representative in Essen, Germany, told Anadolu Agency that the adhan could be heard from over 50 local mosques.

Alptekin said that adhan being broadcast by loudspeaker is generally not allowed in Germany, except for special occasions.

Meanwhile, in the Netherlands broadcasting the adhan through speakers is growing more widespread to promote solidarity against the virus.

After Italy and Spain, Germany is the country in Europe worst hit by the pandemic, al-Bawaba news website reported.

Germany's death toll rose to 1,230 on Friday, while the Netherlands’ death toll surpassed 1,487.

Since appearing in Wuhan, China, last December, the novel coronavirus has spread to at least 181 countries and regions.

Data compiled by the US’ Johns Hopkins University shows worldwide infections surging past 1 million, with more than 58,000 deaths. Over 225,000 people have recovered.

More Islamic Cemeteries Needed in Italy in Wake of Coronavirus