Quranic Contest in UAE Slated for First Day of Ramadan

General
News ID: 3471213
TEHRAN (IQNA) – The sixth edition of the Holy Quran Tahbeer and its Science Award in the UAE will be launched on the first day of the holy month of Ramadan. 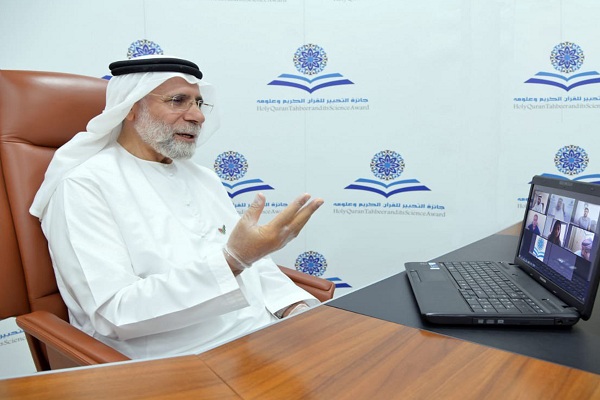 The Higher Committee of the Holy Quran Tahbeer and its Science Award held a virtual press conference on Monday to announce the upcoming launch of its sixth edition for the year 2020, which will be held under the patronage of Sheikh Saif bin Zayed Al Nahyan, Deputy Prime Minister and Minister of the Interior.

The award aims to encourage Muslims in the Arab and Muslim world to compete in the field of the Holy Quran, recitation, Tajweed and sciences, as well as direct young people to understand the spirit of Islam, moderation, and its humane message to mankind, WAM news agency reported.

During the press conference, which was held remotely via video conferencing, Farouk Hamada, Secretary-General of the Award and Adviser to the Crown Prince Court in Abu Dhabi, said, "The award is designed to promote interest in and attachment to the proper study of the Holy Quran and its sciences by instilling the right values in young people and encouraging them to read and recite the Holy Quran with Tajweed properly and clearly.”

Hamada pointed out that the award promotes the noble Islamic values of moderation, tolerance, and a correct understanding of the purposes of Sharia and its ways. He also explained that the sixth edition of the award will be officially launched on the first day of Ramadan, the official partner of the event. Additional details can be found on the official website: www.tahbeerquran.com.

Ahmed Ibrahim Subaian, General Manager of the award, explained that this year’s edition of the award features two main categories: the Tarteel (recitation) of the Holy Quran category and the short film category, each divided into several sub-categories, sections and special conditions. All entries will be evaluated by a panel of specialists, with the necessary expertise for each category. He also noted that applications will be accepted from the 1st day of Ramadan until the 15th day of Ramadan.