General
News ID: 3471594
TEHRAN (IQNA) – Leader of the Islamic Revolution Ayatollah Seyed Ali Khamenei said Imam Khomeini created a storm in the ocean of the Iranian nation, turning the Iranian nation that had abandoned self-determination into a determining, influential nation in the world. 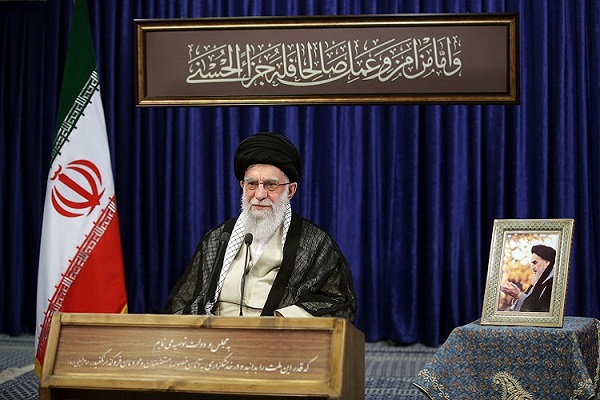 The ceremony commemorating the anniversary of the passing away of Imam Khomeini (RA) - the great founder of the Islamic Republic of Iran - which used to be held annually at his resting place with masses of people attending, was not held this year due to the coronavirus pandemic and instead, Ayatollah Khamenei delivered a speech which was broadcast live on various TV networks.

Imam Khamenei in his speech referred to the chaotic condition in the US following the murder of another black man by the American police and stated, “A police officer putting his knee on a black man’s neck and pushing until he dies shows the nature of the American government.”

The following is excerpts of the statements his eminence made at this speech, according to Khamenei.ir:

"Nations resemble an ocean. Creating a storm in an ocean is not something anyone could do. Imam Khomeini created a storm in the ocean of the Iranian nation, turning the Iranian nation that had abandoned self-determination into a determining, influential nation in the world.

"During the Pahlavi rule, the Iranian nation had a contemptuous outlook towards itself, not only before world powers but also before govt officials. It didn’t occur to people they could rise up against the Pahlavis and global powers. Imam Khomeini inspired this belief in people.

"The Iranian nation regarded a despotic government to be a natural matter. Imam Khomeini turned such a nation into a nation that determined their own type of government. People’s demands progressed from trivial, limited requests to great, global demands.

"Imam Khomeini revolutionized people’s view of religion. Religion developed from being a personal matter limited to prayers and fasting into being a matter for building a civilization, a society and human beings. Such a change was even produced in the jurisprudence.

"Imam Khomeini caused the US leaders at that time to admit that Khomeini had humiliated them. Imam Khomeini proved that superpowers can be broken and beaten. You saw how the USSR collapsed, and you can see the status of the US today.

"Khomeini was an Imam of change but believed all this to be from God. He saw the spiritual evolution of the youth as God’s doing. He believed in “You didn’t throw when you threw, it was God who threw.” [8:17] He said the youth’s evolution was greater than the Pahlavis’ defeat.

"What is being witnessed in US cities today is a result of realities that had always been kept concealed. However, today these have been revealed leading to the disgrace of the US government.

"The crime committed against this black man is the same thing the US govt has been doing against all the world. They have done the same in Afghanistan, Iraq, Syria, Vietnam, and many other countries of the world. This is the US govt’s nature and character that is being exposed today.

"The people’s slogan of #ICantBreathe, which can be heard in the massive protests throughout the US, is the heartfelt words of all nations against which the US has committed many atrocities.

"The US govt was disgraced due to its behavior. The corona outbreak started later in the US than other countries, they benefitted from other nations’ experience, and they could have prepared, but they failed to manage Corona properly due to the corruption of their govt.

"In dealing with its people, the US government has behaved in the worst manner. They kill people and yet claim they advocate human rights. Was not the black man whom you murdered a human being?

"The people of the United States have every right to feel embarrassed and ashamed by their governments, particularly the current government."