General
News ID: 3472039
TEHRAN (IQNA) – A booby-trapped car exploded in the northwestern Syrian city of Azaz, occupied by Turkish-backed militants, killing at least seven and wounding dozens of others. 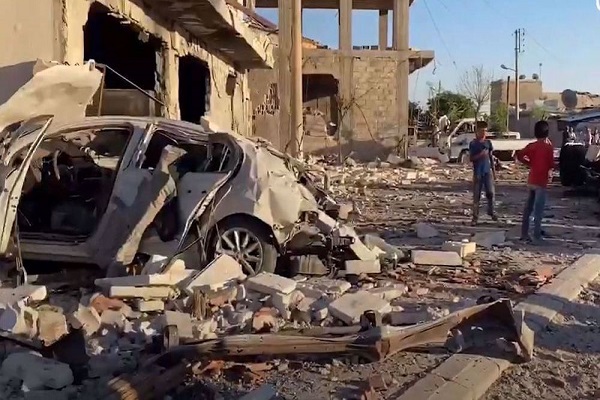 The incident took place in a village near the city of Azaz in Aleppo province, the Turkish state-run Anadolu Agency reported on Sunday.

The so-called Syrian Observatory for Human Rights (SOHR) says the booby-trapped car exploded at a roundabout leading to the entrance of the Bab al-Salam border post.

The SOHR chief Rami Abdel Rahman says seven people – including five civilians – have been killed and over 60 others wounded, but Anadolu puts the number of wounded at 85.

There were women and children among the wounded, AFP quotes the SOHR chief as saying.

The injured civilians, some of whom are in critical conditions, have been transported across the Turkish border, and hospitalized in the city of Kilis, the report said.

Turkish-backed militants seized the town as a result of Ankara's Operation Euphrates Shield launched in 2016.

Northern Syria is regularly rocked by bomb blasts, blamed by Ankara on the Kurdish-led People's Protection Units (YPG), which Turkey regards as an extension of the Kurdistan Workers' Party (PKK).

However, SOHR blames Daesh for Sunday's attack, saying it was possibly in retaliation for a surge in operations by Turkish and Turkish-backed forces against Daesh cells in the region.

The deadly attack took place as Syrians voted to elect a new parliament, including, for the first time in years, in former rebel bastions.

More than 7,400 polling stations opened at 7:30 a.m. local time (0430 GMT) on Sunday, including in former militant strongholds of Eastern Ghouta, east of central Damascus, and the southern countryside of the northwestern Idlib province.

President Bashar al-Assad's Baath party and his allies are expected to win most of the parliament's 250 seats in the third such polls to be held in Syria ever since foreign-sponsored militancy broke out in March 2011. The two previous polls were staged in May 2012 and April 2016 respectively. In the last legislative elections in 2016, turnout stood at 57.56 percent.