Houthi: Regimes Supporting Israel Complicit in Its Crimes against Palestinians

General
News ID: 3472329
TEHRAN (IQNA) – The leader of Yemen's Houthi Ansarullah movement roundly denounced attempts by a number of Arab states to establish full diplomatic relations with Israel, saying such countries are complicit in the Tel Aviv regime’s crimes against the Palestinian nation. 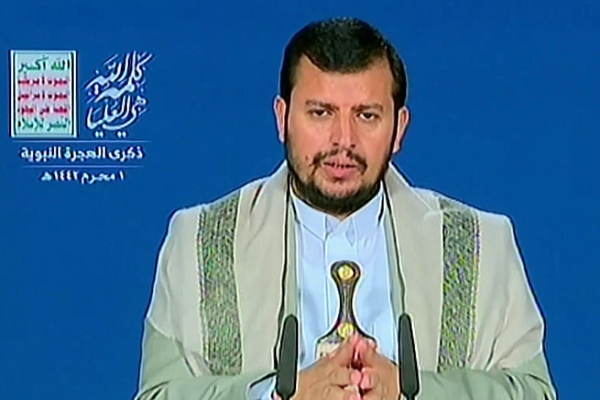 “The Arab regimes supporting the Zionist regime are indeed partners in crimes against Palestinians,” Abdul-Malik al-Houthi said in a televised speech broadcast live from the capital, Sana'a, on Thursday evening.

He also censured efforts by certain Arab states to portray a good image of the Tel Aviv regime, emphasizing that such countries are actually turning a blind eye to facts, and telling lies in a bid to justify their normalization of ties with Israel.

“The Zionist regime was created through stealing Palestinian land and killing innocent people. Israel is the worst enemy of the Muslim world, and has been sinister, destructive and illegal ever since its creation,” Houthi pointed out.

The Ansarullah chief also condemned a deal that will lead to full normalization of diplomatic relations between the United Arab Emirates and Israel.

He said that the United States and the Tel Aviv regime only think of exploiting Arab regimes in the Persian Gulf region.

“Persian Gulf Arab regimes do not seek peace for Muslims, but rather try to sow the seeds of discord and division among Muslim nations," he noted.

Under the agreement between Israel and the UAE, the Tel Aviv regime has allegedly agreed to "temporarily" suspend applying its own rule to further areas in the occupied West Bank and the strategic Jordan Valley that Prime Minister Benjamin Netanyahu had pledged to annex.

Israeli leaders, however, lined up last week to call UAE Crown Prince Sheikh Mohammed bin Zayed Al Nahyan's bluff that Israel's annexation plans were off the table after the deal.

“There is no change to my plan to extend sovereignty, our sovereignty in Judea and Samaria, in full coordination with the United States,” Netanyahu said in Jerusalem al-Quds, using the biblical name for the occupied West Bank.

A senior Israeli source also said US President Donald Trump’s administration had requested to temporarily suspend the announcement of annexations "to first implement the historic peace agreement with the UAE.”

Israeli and UAE delegations will meet in the coming weeks to sign bilateral agreements covering sectors, including investment, tourism and direct flights and the opening of reciprocal embassies, according to the accord.

‘US military presence in Iraq unlawful’

Also in his Thursday remarks, Houthi censured the deployment of US troops to Iraq as “illegal,” saying, “US [military] presence in Iraq is a gross violation of international law as well as the country’s sovereignty,” Press TV reported.

Anti-US sentiment has been running high in Iraq since the assassination of top Iranian anti-terror commander Lieutenant General Qassem Soleimani, the commander of the Quds Force of Iran's Islamic Revolution Guards Corps, and his Iraqi trenchmate Abu Mahdi al-Muhandis, the deputy head of the Popular Mobilization Units – better known by the Arabic name Hashd al-Sha’abi, and their companions in a US assassination drone airstrike authorized by Trump near Baghdad International Airport on January 3.

Iraqi lawmakers approved a bill two days later, demanding the withdrawal of all foreign military forces led by the United States from the country.

The US responded to the move by threatening crippling sanctions against the Arab country.

Elsewhere in his remarks, the leader of Yemen's Ansarullah movement described the deepening economic crisis in Lebanon as the “upshot of continued plots hatched by the country’s enemies.”

The crisis in Lebanon is aggravated by the sanctions of the US and its allies, which have caused the Lebanese pound to lose more than 80 percent of its value.

With the US government keeping a tight lid on the flow of the greenback to Lebanon, protesters have repeatedly attacked banks and torched them in Beirut and other cities after they ran out of cash in the face of customers who wanted to convert their deposits to dollars.

‘Protecting agriculture can help Yemen in face of sanctions’

Turning to Yemen’s domestic issues, Houthi underscored that Yemenis could successfully overcome lingering problems in the impoverished Arab country through reinforcing the agricultural sector despite the Saudi-led sanctions and tight blockade.

He then hailed the recent victory by Yemeni Armed Forces and allied fighters from Popular Committees in battles against Saudi mercenaries and Riyadh-sponsored militiamen loyal to former Yemeni president Abd Rabbuh Mansur Hadi in the country’s central province of Bayda, noting such triumphs were scored in spite of the US and Saudi air support for the enemies.

“The Yemeni people are in the right in the face of the Saudi-led aggression and sanctions,” Houthi concluded.

In March 2015, Saudi Arabia embarked on a bloody campaign against Yemen with the declared aim of putting Hadi back to power, and eliminate the Houthi Ansarullah movement.

Riyadh has not been alone in the campaign. It has been flanked by regional allies and enjoys arms supplies from its Western backers.

Over 100,000 people have been killed, according to some semi-official figures.

The Saudi regime has failed to fulfill the objective of its deadly campaign.

The war has also destroyed and shut down Yemen’s infrastructure. The Yemeni population has been subjected to large-scale hunger and diseases aggravated by the naval blockade imposed on the country by the coalition of aggressors.