Islamophobia A Form of Racism

General
News ID: 3473446
TEHRAN (IQNA) – On Sept 17, 2015 at a campaign rally in New Hampshire, a man in the audience shouted to Donald Trump, "We have a problem in this country; it's called Muslims"; Trump nodded, said "right" and "we need this question". 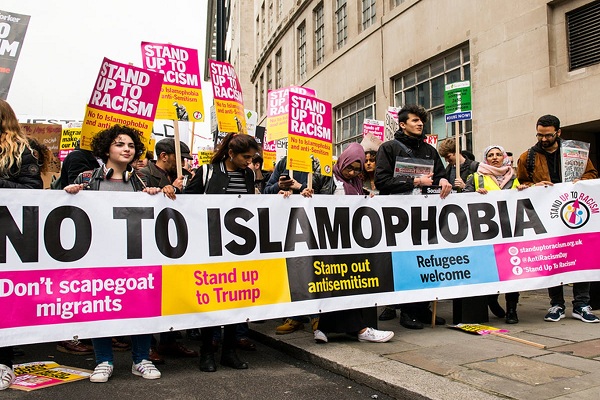 Anders Behring Breivik who killed 69 people  in  Tyrifjorden,  Viken, Norway, on July 22, 2011; Alexandre Bissonnette killed six people at the  Islamic Cultural Centre of Quebec City on Jan 29, 2017; Brenton Harrison Tarrant killed 51 people at the Al Noor Mosque and Linwood Islamic Centre in Christchurch on March 15, 2019 while  live-streaming the massacre on Facebook — they are among the growing numbers of white supremacist supporters who are inspired by their far right leaders to find a "final solution" to the "Muslim problem" and thus solve the "Muslim question".

This infectious talk of the "Muslim problem" and "Muslim question" in the West echoes the 19th and 20th century European debate on the "Jewish problem" and "Jewish question" that led to the "final solution" — the Holocaust carried out by Nazis.

Geert Wilders, founder of the Party for Freedom, in explaining his "Plan for the Netherlands" in 2017, declared "Islamization" as the biggest problem in Netherlands and a threat to the identity and freedom of Netherlanders. Muslims constitute just five per cent of the Netherlands' population of 17.28 million.

European far right politicians' portrayal of Muslims as a threat to their civilization seems crudely plagiarized from the Nazis' portrayal of Jews as an alien race that fed off the host nation and poisoned its culture. Speaking at the September 1935 Nazi Party Congress in Nuremberg, Joseph Goebbels, the Reich Minister of Propaganda of Nazi Germany, warned members of an alleged international Jewish conspiracy to destroy western civilization.

Sounds familiar, doesn't it? The political leadership and media in the West do not recognize Islamophobia as a form of racism on the pretext that Muslims do not belong to a single racial background, all the while treating Muslims as a single identity group.

France under President Emmanuel Macron has enacted Muslim-specific legislation, the so-called Anti-Separatism Bill, under the garb of tackling the threat of "radical Islam". Back in Sept 16, 1919, Adolf Hitler issued his first written comment on the so-called "Jewish question".

In that statement, he defined the Jews as a race and not a religious community and identified the initial goal of a German government to be discriminatory legislation against Jews. In 2011, France became the first European country to impose a ban on full-face veils in public areas.

In 2020, Macron's much advocated anti-separatism legislation carries measures such as stricter oversight of Muslim children's schooling and control over mosques. Such Muslim-specific legislative measures by the French government increasingly resemble racial profiling of Jews and government control of Jewish lives in Nazi Germany.

Nazis viewed and treated Jews as a race whether they belonged to Germany, Austria, Poland, Hungary, Slovakia, Serbia, Romania or Russia. Muslims in the West, despite their diverse geo-cultural and social backgrounds, are generally viewed and treated by governments and nationalists as a race rather than a religious community, an inferior race.

Even Muslims from the Caucasus are looked down upon in the West as belonging to the Asian Caucasus, inferior to the European Caucasian race. Publications like the Danish Jyllands-Posten and French Charlie Hebdo have historically ridiculed the religious, cultural and social values and sensitivities of races considered inferior in their societies.

Nazis also used films, books and posters to target Jews as an inferior race; all these mediums, with the addition of social media, are being used against Muslims in racist patterns in today's West.

Islamophobia is not religious discrimination; it's active racism effectively targeting a geo-culturally diverse community as a race. All the symptoms and historical parallels proving that Islamophopia in today's West is as an explicit form of racism are there.

What's needed for Muslims is to intellectually and politically counter the increasing Islamophobia in the West as the veritable form of racism that it is in effect.

The writer is a socio-economic change strategist, a freelance journalist and a creative communications professional

Zionist Forces Crack Down on Palestinian Protesters in Al-Quds Neighborhood