General
News ID: 3473807
TEHRAN (IQNA) – Yemenis from all walks of life took to streets in the capital Sana’a and other major cities on the Global Day of Action for Yemen, to denounce the US terrorist designation of the Ansarullah movement. 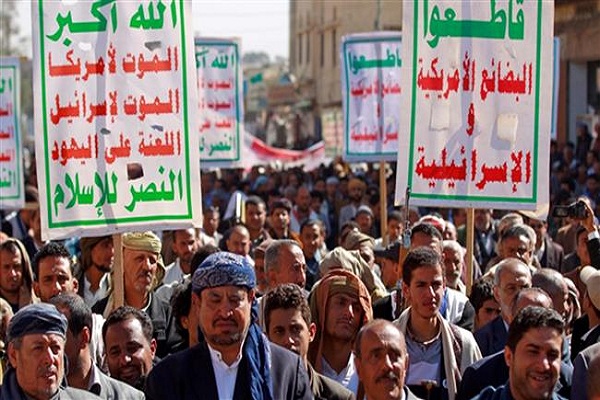 The demonstrators voiced their support for the Ansarullah movement and called on US administration to reverse the decision.

The demonstrators also confirmed that the Ansarullah movement is an inseparable part of Yemen and they are determined to defend Yemen against the Saudi-led coalition’s war.

Earlier, over 170 Yemeni NGOs condemned US terrorist designation of Ansarullah, according to Press TV.

Since the beginning of 2015, Yemenis have been suffering from war and siege imposed by the US-backed Saudi-led coalition, during which war crimes were committed and international humanitarian law was violated by killing thousands of women and children.

Yemenis say the US decision is not against a specific group, but rather against a nation severely suffering from war and blockade imposed by Washington's allies in the region.

0
LIKE
Error Report
Related News
Yemeni Families File Petition against US over Killing of 34 Relatives in Drone Strikes
Tags: Yemen ، Ansarullah ، demonstrations ، US
Your Comment