General
News ID: 3474144
TEHRAN (IQNA) – Yemen warned of attacking the Saudi Arabian oil giant’s facilities if a Riyadh-led coalition waging a war against the country strikes oilfields in a western province that is being liberated by Yemeni forces. 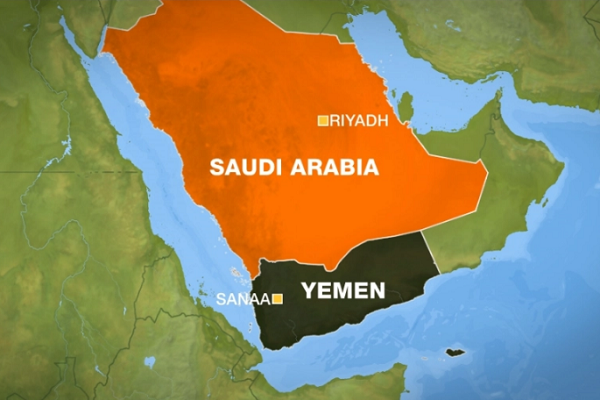 The Yemeni National Salvation Government relayed the message to the Saudi kingdom via diplomatic channels as Yemen’s Army and Popular Committees are nearing the “Safer” oilfields in the west-central Ma’rib Province, Lebanon’s Arabic-language al-Akhbar newspaper reported on Tuesday.

Saudi Arabia’s Aramco oil company serves as the backbone of the kingdom’s economy.

The Yemeni government told Riyadh from its seat in the capital Sana’a that the area featuring the oilfields was its “redline.”

The warning came after some Ma’rib-based tribes speculated that elements close to the invading coalition might have bombed the oil-rich area.

The Sana’a-based officials also cautioned that reprisal for any attack on the oilfields would be far greater in extent than the “5th Operation of Balanced Deterrence.”

As part of the operation that started on Saturday and lasted until early Sunday, the Yemeni defense forces launched a ballistic missile and as many as nine drones against the Saudi capital. Simultaneously, they flew six more UAVs against two targets in the kingdom’s southwest.

Earlier, Armed Forces’ spokesman Brigadier General Yahya Saree said Yemen was about to go on a new phase of deterrent attacks that would see the country return every act of aggression proportionally.

The official reported on the latest raft of Yemen’s counteroffensives on Tuesday, saying the forces had conducted fresh strikes against the Abha International Airport in southwestern Saudi Arabia. The strikes used Qasef K2 UAVs that accurately hit their pre-determined targets.

The Yemeni forces have never ceased their defensive activities throughout the entire course of the war that the kingdom and its allies launched in 2015 to return power to Yemen’s former pro-Riyadh government.

Tens of thousands of Yemenis have died and the whole Yemen turned into what the United Nations describes as the scene of the world’s worst humanitarian crisis.

To help Saudi Arabia — the United States’ most treasured regional ally after the Israeli regime — in the war, former US president Donald Trump poured out advanced and precision arms and munition into the kingdom.

His successor Joe Biden has alleged that he would stop Washington’s support for the Saudi-led war.

‘Yemen given no peace plan yet’

However, Mohammed Ali al-Houthi, a member of Yemen’s Supreme Political Council, said Sana’a had not been proffered any peace proposal on the part of any country yet.

Sana’a’s own proposals have also failed to secure the approval of the opposite side, he added, speaking to Russia’s Sputnik news agency.

He criticized the UN’s inaction in the area, saying the world body’s special envoy Martin Griffiths was among those who were yet to come up with any peace plan to resolve the crisis. As long as this situation persisted, Yemen would hold on to its slogan of “either real peace or struggle until victory.”

Also on Tuesday, Yemen’s al-Masirah television network cited a Yemeni aid official as lashing out against a recent so-called aid conference that had raised pledges of no more than $1.7 billion in supposed assistance for the country.

The amount of aid that was proposed during the virtual UN donor conference, co-hosted by Sweden and Switzerland, has been criticized by UN Secretary-General Antonio Guterres as “disappointing.”

The official said such money would not take care of even 10 percent of Yemen’s needs and noted that such events rather served to “exonerate Saudi Arabia and the [other] invaders” that helping Yemen out.

The UN, he added, would have only played its humanitarian role after it helped lift a siege that the invaders have been enforcing against the country and enabled imports of oil products into Yemen.