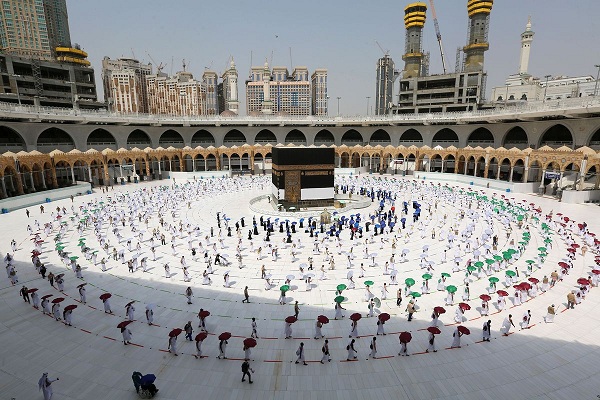 He said, however, that the exact estimation could only be made after final announcement by the Saudi authorities regarding the standard operating procedures (SOPs) and number of pilgrims for the religious practice.

In an interview with a TV channel, he said that Saudi Arabia had not announced the Hajj policy yet but Pakistan had completed the arrangements to send limited pilgrims to the kingdom.

“This year's Hajj would be a bit costlier as compared to the expenses incurred on the pilgrimage previously due to adequate coronavirus SOPs.”

The minister maintained that it would not be possible for Saudi Arabia to make normal arrangements as little time is left for Hajj.

Qadri explained that the Pakistan government was in contact with Saudi Arabia and the kingdom also wanted to take major Muslim countries into confidence before making a final decision.

“Saudi Arabia is formulating strict SOPs to counter coronavirus during Hajj and Pakistan would be ensuring implementation on them,” he said.

“All pilgrims will have to take negative coronavirus test before departure and will have to be in quarantine for three days upon arrival in Saudi Arabia,” he added.

“COVID test will also be mandatory on arrival in Medina from Mecca and on returning back to Mecca.”

According to the minister, there will be a specific time for every country to perform Tawaf-e-Ziarat and Umrah to avoid rush.

As Saudi Arabia has banned people who have received vaccines other than the prescribed ones, Qadri said "Pakistan will convince Saudi Arabia to recognize Chinese vaccine as WHO has approved Sinopharm and most of Pakistanis have been administered this vaccine."

Meanwhile, the Ministry of Religious Affairs and Interfaith Harmony has urged the intending pilgrims not to book their slot for the upcoming hajj pilgrimage before the announcement of Hajj Policy.

A spokesman of the ministry said in a statement that some unscrupulous elements could inflict pecuniary losses to the intending pilgrims by wrongly promising them the share from the Hajj quota.

He said the booking agents did not have Hajj quota at the moment as the Saudi government had not yet announced the allocation for any country.

The spokesman asked the intending pilgrims to remain cautious and wait for the Hajj policy announcement as all such bookings shall be considered illegal before the ministry's announcement.

He said the ministry would announce Hajj Policy on receiving Hajj quota from the Saudi government.