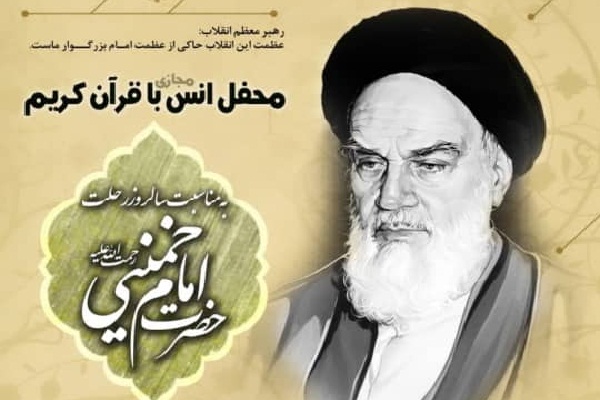 The Astan (custodianship) of the mausoleum of Hazrat Abdol Azim Hassani (AS) in Rey, south of Tehran, organized the program in cooperation with Anwar Rasoul Azam Cultural Institute.

A number of top Qaris, including Mehdi Adeli from Iran, Sheikh Izzat Rashid from Egypt and Shekh Maytham al-Tammar recited verses from the Holy Book at the event.

Also, there were a number of Tawasheeh performances by the Mihrab Tawasheeh (religious singing) group.

Grand Ayatollah Seyed Rouhollah Mousavi Khomeini, better known as Imam Khomeini, passed away on June 3, 1989 at the age of 87.

As an anti-imperialist icon, he devoted his life to standing up to Iran's former Pahlavi monarchy, a key ally of the United States, and eventually paved the way for the regime’s downfall in the 1979 Islamic Revolution.

He spent many years in exile in Iraq, Turkey and France, from where he led a swelling grassroots movement, which ultimately put an end to millennia of monarchical rule in Iran.

He came back home on February 1, 1979 after the Shah fled the country amid angry popular demonstrations. The Pahlavi regime fully collapsed 10 days later on February 11.