General
News ID: 3476061
TEHRAN (IQNA) – The 35th edition of the International Islamic Unity Conference will be held with the in-person participation of some 50 prominent figures, an official said. 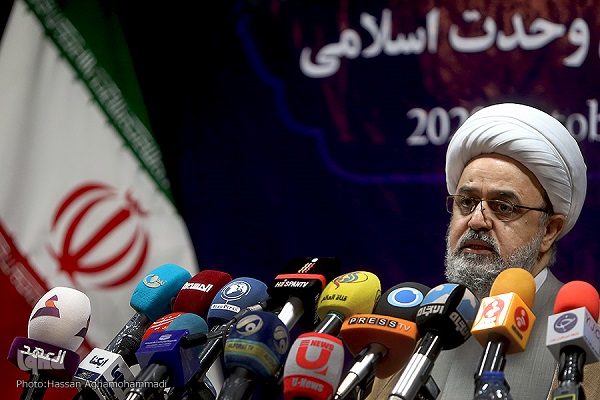 Hojat-ol-Islam Hamid Shahriari, the secretary general of the World Forum for Proximity of Islamic Schools of Thought (WFPIST), told IQNA at a press conference here in Tehran on Saturday that this year’s international event will kick off on Tuesday, October 19.

He said that given the continuation of the coronavirus pandemic, it was decided that a limited number of individuals at the level of Muftis and prominent figures from Islamic countries take part in this year’s conference and the next.

He noted that there will also be guests attending the conference virtually.

Hojat-ol-Islam Hamid Shahriari further said that the motto of the 35th edition is “Islamic Unity, Peace and Avoiding Discord and Conflict in Muslim World”.

Given the problems and tragedies the Muslim world is facing, such as wars, bloodshed and acts of terrorism, the WFPIST selected “War and Just Peace” as the main theme of this year’s conference, the cleric added.

Palestine and Islamic resistance; Islamic fraternity and countering terrorism; mutual respect among Islamic schools of thought; and Ummah Wahida (united community) and a union of Islamic countries will be among the subjects of discussion, Hojat-ol-Islam Shahriari stated.

He also said that Iran’s president and parliament speaker will officiate the opening and closing ceremonies of the 6-day conference.

The 34th edition of the conference was held virtually last year due to the pandemic.

More than 160 foreign speakers from 47 countries as well as 120 Iranian figures delivered speeches at the video-conference.