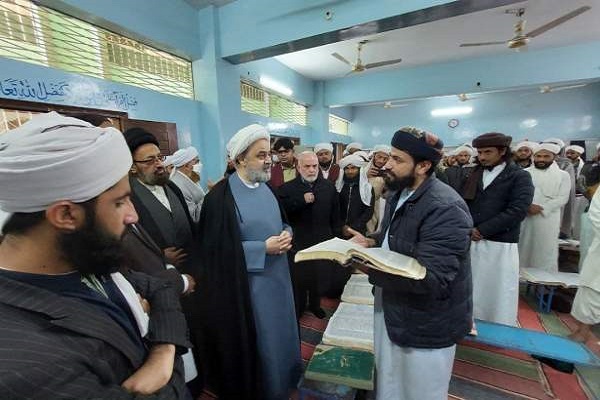 Hojat-ol-Islam Hamid Shahriari, secretary general of the World Forum for Proximity of Islamic Schools of Thought (WFPIST), made the remarks in a meeting with Pakistani Mufti Nazeer Jaan Naeemi in Karachi.

Pointing to a decree issued by Ayatollah Seyyed Ali Khamenei on announcing any insult to Sunni sanctities as ‘Haram’, Shahriari noted that those who do such are not followers of the Islamic Republic of Iran. “We are followers of Imam Ali (AS) who never insulted anybody.”

“The desecrators are either ignorant on religion or are funded by the Global Arrogant powers,” noted the cleric.

The United Kingdom is following a “divide and rule” policy, he said, adding that a number of fake scholars have been hired to tarnish the image of Islam.

True Shias do not desecrate the sanctities of other madhhabs, Shahriari highlighted.

He also went on to mention one of the statements of Ayatollah Seyyed Ali Sistani who had said Sunnis are not merely our brothers, they are our soul.

For his part, the Pakistani mufti said the practical measures are needed to establish unity among Islamic Ummah.

The Iranian scholar arrived in Pakistan last week and has since held separate meetings with the country’s religious officials as well as participating in different conferences focusing on Islamic unity and interfaith dialogue.