General
News ID: 3477631
TEHRAN (IQNA) – An international forum got underway in Beirut, Lebanon, aimed at honoring athletes who have refused to face opponents from the Zionist regime of Israel in international sports competitions. 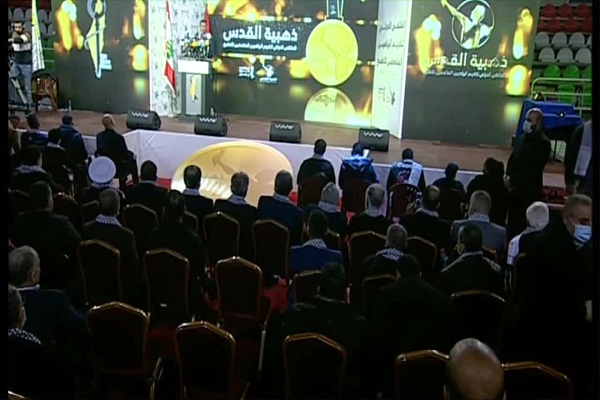 The first day of the event on Monday evening included awarding ‘Golden Medals of Al-Quds’ to the athletes, Al-Manar reported.

The theme of the first day was “Prospects of Opposition to Normalization in Sports”.

The charter of sports code of honor for countering normalization, rejecting injustice, and standing up for truth and justice for observing ethical and human considerations was also approved on Monday evening.

Algerian judoka Fathi Nourine read out the charter, saying it has been adopted as a testimony to fairness and legitimacy of the Palestinian cause and in order to appreciate the sacrifices made by the people of Palestine.

Addressing the forum, Sheikh Yusuf Abbas, coordinator of the Global Campaign to Return to Palestine (GCRP) which has organized the event, said the ‘Golden Medals of Al-Quds’ is a show of appreciation for athletes who are loyal to Palestine and opposed to normalization of ties with the Zionist regime of Israel.

Another speaker, Palestinian thinker Munir Shafiq, hailed the athletes for their stances against Israel and said their courageous stances in support of the truth have angered the Zionist regime officials and media.

“You have served the Palestinian nation and its cause and all Arab and Muslim countries,” Shafiq added.

The forum will continue until Wednesday and the participants will later take a tour of southern Lebanon.

The Global Campaign to Return to Palestine is an International non-government organization and campaign to work for the right of return or oppressed people of Palestine, those were/are expelled by the illegitimate Zionist regime Israel from 1948 to till now.

It includes various NGOs from 80 countries of the world.