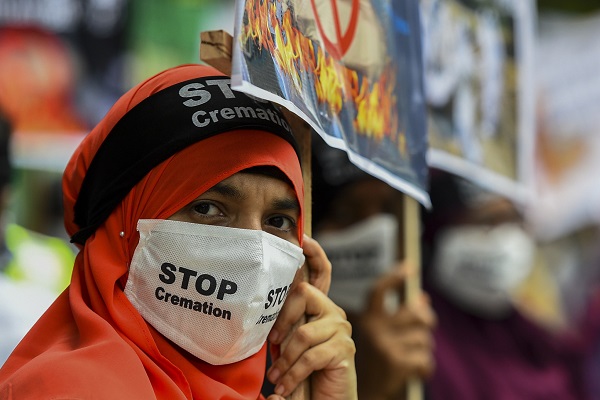 Sri Lanka on Thursday ended a heavily criticised policy that required Muslim Covid-19 victims to be buried at a remote government-designated site in the absence of their families or final religious rites.

Only a year ago, Colombo reversed an initial policy of enforced cremations -- prohibited by Islam -- under intense international pressure, while still refusing to allow traditional burials at cemeteries.

In Thursday's new directive, the country's top health official said the bodies of virus victims could now be handed over to relatives for burial at any cemetery of their choosing.

"The method of disposal, burial or cremation, at any cemetery or burial ground is at the discretion of relatives," Health Director-General Asela Gunawardena said.

The shift came as a UN Human Rights Council meeting in Geneva was set to discuss Sri Lanka's treatment of religious minorities as well as Colombo's overall rights record.

The government then allowed burials at the remote Oddamavadi area in the island's east under military supervision, but without the bereaved family.

Sri Lanka's Buddhist majority, strong backers of the current government, are typically cremated, as are Hindus. Muslims must be buried without a coffin and facing Mecca according to their religious beliefs.

Hardliners within the Buddhist community had argued that burials of virus victims could spread the virus through groundwater, an argument debunked by experts.

In December 2020, authorities ordered the cremation of at least 19 Muslim Covid-19 victims after their families refused to claim the bodies from a hospital morgue in protest against the forced cremations policy.

Muslim community leaders said many of their elders were reluctant to seek medical help for Covid-19 because they feared that they would be cremated if they were identified as having the virus.