General
News ID: 3478626
TEHRAN (IQNA) – Since far-right extremists in Sweden went as far as instigating a campaign for burning the Quran, the country has been rocked by anti-migrant rallies and clashes.. 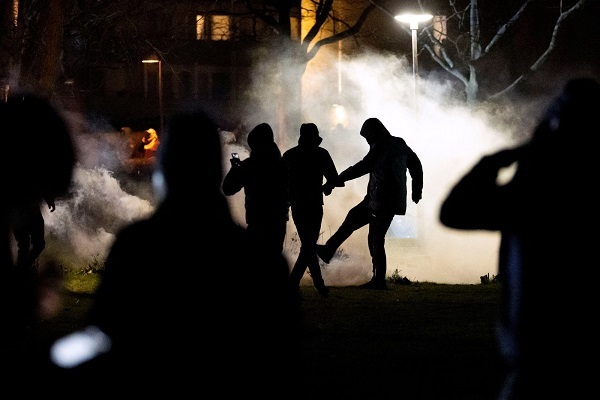 A country thought to be a safe haven for refugees, was set aflame when riots erupted last week, after the anti-Muslim Danish-Swedish politician, Rasmus Paludan, announced his burning "tour" of the Quran during the holy month of Ramadan.

Over 40 people have been arrested and some injured when protesters took to the streets against Swedish authorities' decision to allow the far-right group's plans to burn the copies of the Muslim holy book.

Azra Muranovic, deputy chair of the Municipal Council of Vernamo and Social Democratic Party politician, said the Quran burning was a planned campaign.

"I think that the burning of the Quran was not an accident. Rather, a planned and distasteful campaign to provoke riots by using freedom of speech. I'm very sorry that he succeeded," she said.

Now it seems that Swedish tolerance and freedom of speech are being put to a test as the burning of the Quran has pushed the country's limits of "free speech."

Muranovic believes freedom of speech in the case of the Quran burning incident might be a problem.

"I think that the question is tricky because freedom of speech gives you freedom to state your thoughts regardless of how distasteful it is.

"After the burning of the Quran and the violence that followed, the police have raised the question to the court again: 'Is this specific matter hate speech or freedom of speech?'" she added, noting that they saw the incident as "hate speech."

Rashid Musa, former chairperson of the Muslim Swedish Youth Organization, thinks the historical context of the latest events also need to be taken into account.

"The Swedish authorities are using free speech as an argument to allow him (Paludan) to burn the Quran, but we have to understand and also put this into historical context," said Musa, who is also a known Muslim public debater.

"In 1920s Germany, before the Holocaust, the Nazi regime used to burn Jewish literature and Jewish books to advance their politics. We don't have to go that far into history as we can look at Bosnia in the mid-1990s, where Serbian fascists used to burn Bosnian literature and bomb libraries," he added.

According to Musa, the Quran burning was part of efforts to de-humanize minority groups, in this case, Swedish Muslims.

In August 1992, in the Bosnian capital of Sarajevo, almost 2 million books were set on fire. Vibrant Ottoman-era manuscripts and fragile 500-year-old brochures were turned into ash when the National Library of Bosnia and Herzegovina was shelled and burned by Serb forces.

The far-right populist Sweden Democrats party, once politically forbidden due to its neo-Nazi ties, is now the third-largest party in the Riksdag, the Swedish parliament. The party has managed to appeal to many voters by pushing its anti-Muslim and anti-immigration narrative.

Putting the most recent Quran burning into political context as well, Musa said far-right extremism had been on the rise in Sweden for "the past 15 years and even more." Paludan has been holding events to burn the Muslim holy book for two years, said Musa, adding that this was "nothing new."

"This is just a result of the anti-Muslim racism that already exists in the society," he asserted.

Other hate crimes committed in Sweden include those against Muslim women wearing the headscarf, as well as those against mosques.

Sweden Democrats do not believe that problems of crime or integration are primarily due to failures of socioeconomic policy or government bureaucracy. Instead, they blame it on culture, both that of Muslim immigrants and of political correctness.

Often, left-wing parties are also scrutinized by the far right in Sweden.

"Their top goal is to prove that we all cannot live together in a welfare society. When they can't take us on the politics, they go personal," said Muranovic. They are also "harder on female left-wing politicians and they dig for trash to discredit you as a person," she added.

The far-right network of "an alternative media" pushes an anti-Muslim narrative, in which it blames the country's problems on Muslims, regardless of whether the claims are true or false. Often, when confronted with concerns of racism, they claim that they are just normal, working-class people trying to shed light on economic and cultural problems. They claim non-Western and predominantly Muslim refugees cause these problems that they say traditional political parties do not address.

While some claim that the ruling Swedish Social Democratic party has shifted slightly to the right, Muranovic disagrees. "I don't think that the party has shifted to the right at all. Stefan Lofvens' government, however, was lead together with the Green Party, and through budget cooperation with two liberal parties, which of course then entails negotiation to be able to move forward politically," she said.

Since Magdalen became prime minister and the Green Party left the government, it has been "easier to put forward our politics."

Swedish clinical psychologist, Stefan Hellsten, thinks that this shift might be triggered by poorly managed immigration. "There seems to be a shift toward the right within Swedish social democrats because of certain challenges. For example, immigration (has been) quite high for some years now and it has not been handled rationally, and now we're overwhelmed," he argued.

Regardless, the Quran burning has hurt the feelings of Muslims living in the country that they call home.

Mahmoud Khalfi, the imam and director at the Stockholm Central Mosque, said that in December, he had personally witnessed a Quran burning in Skarholmen. "I remember how hurtful it was," he said, adding that many Muslims had "called and told us how hurtful and provocative it was to burn the Holy Quran."

"The Quran is sacred in Islam. It's the word of God. Burning the Quran, therefore, becomes enormously hurtful for us Muslims," he explained

Sweden is known for its national narrative of "Swedish Exceptionalism" and its welcoming policy toward refugees and providing asylum. As other European countries tightened their borders in the 1990s and 2000s, Sweden opened up. However, things changed with the refugee crisis in 2015, marking the end of this open-armed attitude.