General
The link was copied
News ID: 3479451
TEHRAN (IQNA) – Hundreds of Iraqi people gathered in front of the Indian embassy in Baghdad on Friday, voicing protest against the insults to Prophet Muhammad (PBUH) by Indian officials. 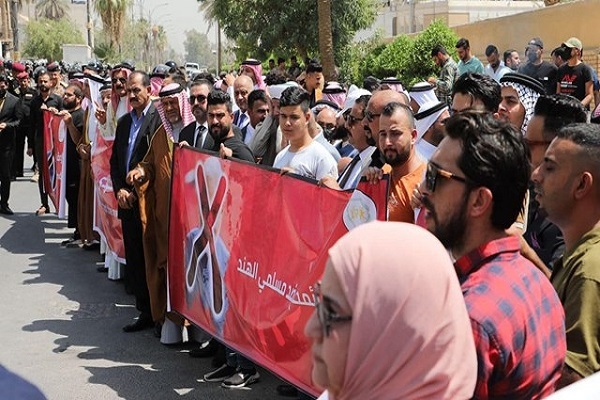 Organized by a Sunni coalition of the Iraqi Parliament, the demonstration was attended by a number of parliamentarians, human rights activists, and heads of tribes.

Protestors called for putting end to any sort of discrimination against Muslims and insults to Prophet Muhammad (PBUH).

They also urged the Indian government to make an official apology for insults to the Prophet (PBUH) and the oppression of Muslims in India.

The protest comes weeks after BJP spokesperson Nupur Sharma made insulting remarks against the Prophet (PBUH) on a TV program and another spokesperson Naveen Jindal repeated the remarks on social media.

The insult has been widely condemned by Muslims inside and outside India as some countries demanded an official apology from the ruling BJP government. In response, the BJP suspended Sharma and expelled another spokesman Naveen Jindal, claiming that what the two spokespersons have said does not reflect the views of the Indian government.