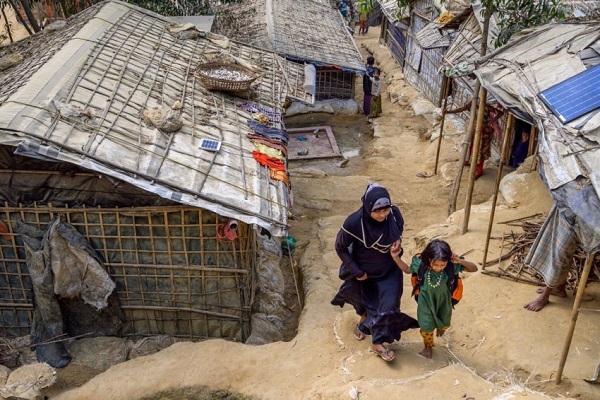 The trip by Michelle Bachelet includes a visit to the squalid camps where over a million displaced Rohingya refugees from Myanmar reside.

The visit comes five years after Myanmar's military committed genocide against the country’s minority Rohingya Muslims, forcing members of the community to move to neighboring countries like Bangladesh and India.

The Myanmar government of former de facto leader Aung San Suu Kyi, which was ousted by the military in a coup, supported the military crackdown against the Rohingya Muslims. She even traveled to The Hague in December 2019 to defend the military's atrocities.

Thousands of Rohingya Muslims were killed, raped, tortured, or arrested by the junta forces, according to the United Nations, which has described the community in Myanmar's western Rakhine State as the most persecuted minority in the world.

Presently, around 850,000 Rohingya refugees remain stuck in squalid and crowded conditions in refugee camps in Bangladesh.

During her visit, Bachelet will meet Bangladesh's Prime Minister Sheikh Hasina, who has a record of human rights abuses. Under her government, security forces have killed thousands of people in staged shootouts, while hundreds of others, most of them from the opposition, have disappeared, activists say.

Nine groups including Human Rights Watch said that Bachelet should "publicly call for an immediate end to serious abuses including extrajudicial killings, torture, and enforced disappearances" in Bangladesh.

Last year, the US imposed sanctions on the country's elite paramilitary force, the Rapid Action Battalion (RAB), as well as seven of its current and former officers over serious human rights violations.

However, Bangladesh denies the allegations and stated that it would highlight its "sincere efforts to protect and promote human rights of the people."