New Report Warns of Institutionalization of Islamophobia in Europe

General
The link was copied
News ID: 3480598
TEHRAN (IQNA) - A new report has warned that Islamophobia remains a growing threat across Europe with several countries enacting policies that have contributed to the institutionalization of the issue. 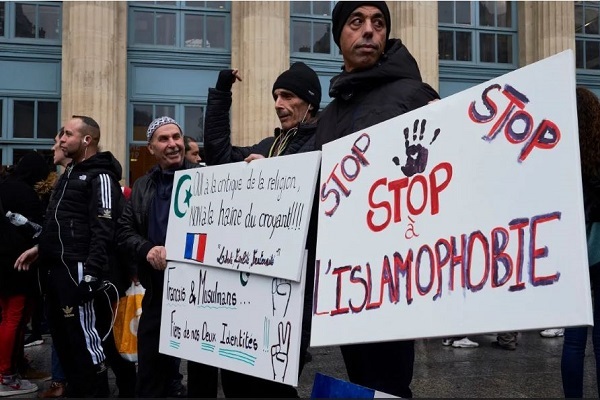 According to the European Islamophobia Report 2021, Islamophobia was "as pressing a problem" across the continent as it was in previous years.

It said countries, such as the UK and France, became "the main spots of anti-Muslim hatred and Islamophobic incidents."

"Furthermore, anti-Muslim campaigns of far-right parties in EU member States dominate the discrimination against Muslim individuals and communities", read the report, which focused on 27 European countries, and was prepared with contributions from 35 leading academics and experts in the field.

The report links the persistence of anti-Muslim racism to "the backdrop of a general worrisome trend: the decline of liberal democracy in Europe".

It warns that major forces within Europe, singling out countries like France, are still "investing less in the fight against Islamophobia, and more … into normalizing Islamophobia."

"The Islamophobia becoming normalized and institutionalized by liberal democracies such as Austria, Denmark, and France is alarming," the report said.

Apart from Islamophobic incidents across Europe, the report details systemic discrimination faced by Muslims in all areas of life, from employment to health care, education and the justice system.

As many as 1,061 anti-Muslim hate crimes were recorded in Austria.

Most of the cases were online (68 per cent), came from politicians (32 per cent), and were in the public sphere (25 per cent), the report said.

"The vast majority of perpetrators were male (76.9 per cent) and the victims were primarily women (69 per cent)," it added.

Citing data from another anti-racism watchdog, ZARA, the report said 1,977 racist and anti-Muslim acts were documented, which primarily targeted women.

Women bore the brunt of Islamophobic and racist attacks in Belgium, according to the report.

It said 89 per cent of all cases reported to the Collective for Inclusion and Against Islamophobia in Belgium pertained to Islamophobia against women.

There were 213 anti-Muslim incidents recorded in France in 2021.

"Among them, half (109) concern damage to Muslim places of worship, cultural centres and cemeteries, and 22 per cent concern attacks on persons," the report said.

It said 2021 saw "a higher level of violence in France both in terms of language (with increasingly hateful and worrying Islamophobic discourses) and approach (with laws repressing religious, visible, organised and vocal Muslims) — a violence that highlights the secondary place granted to French Muslims in their own country."

There were 732 Islamophobic crimes registered across Germany last year, according to the report.

These included 54 cases of attacks on mosques and 43 incidents where individuals were targeted.

The report said 14 cases of Islamophobic incidents were recorded in Greece in 2021.

"Politics, religion, media (both printed and online), and the Internet continued to be the primary four realms playing a significant role in the reproduction of Islamophobia in the Greek public domain throughout 2021," read the report.

"Islamophobia in Greece was expressed primarily by certain political parties and politicians of the right and extreme right, (self-proclaimed) neo-liberals, figures of the Orthodox Church of Greece, printed and electronic media, and journalists including their posts on social media."

Spain has seen a surge of 41 per cent in hate crimes over the past five years.

"From these crimes, 678 (37.6 per cent) were racially motivated or xenophobic," the report said, citing Spanish Interior Ministry data.

There were 996 cases based exclusively on religious grounds between 2017 and 2021 in Sweden, while the overall number of hate crimes over the period stood at 14,710.

"However, most complaints of religious discrimination were directly related to ethnic discrimination, numbering 4,298 during this period," the report said.

"Muslim children are over-represented in statistics published by the Swedish public health agency, where almost 20 per cent of non-European children have experienced abusive treatment due to their ethno-religious background and more than 15 pr cent have experienced discrimination in school."

Citing figures from Switzerland's Federal Statistical Office, the report said 12 per cent of the population exhibited hostile attitudes toward Muslims, while 34 per cent tend to strongly believe negative stereotypes about the community.

There was "a continuing increase in the overall number of reported cases" in the UK, with authorities registering a 9 per cent rise from 2020 to 2021.

At least 45 per cent of all "religiously aggravated" hate crimes involved people of Muslim faith and background.