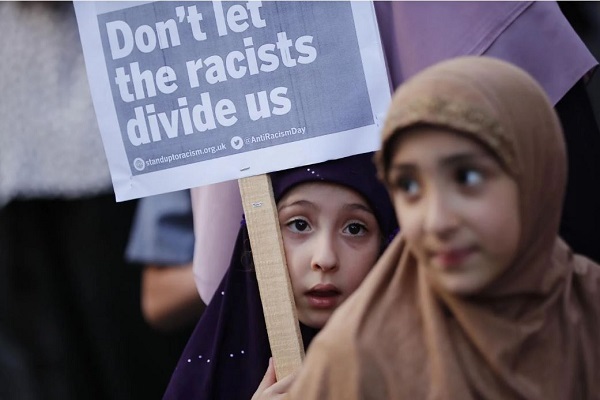 France, Denmark and Austria were among countries singled out over policies which campaigners said were contributing towards a “systematic suppression of Muslim civil society” across the continent.

Addressing the Organization for Security and Cooperation in Europe’s (OSCE) Human Dimension Conference in Warsaw on Thursday, Lamies Nassri, a project manager at the Centre for Muslim Rights (CEDA) in Denmark, said Islamophobia was spreading throughout Europe and called on governments to protect their Muslim citizens.

Nassri told delegates: “It is your responsibility as member states to see to it that citizens in these member states are protected from state racism, surveillance, stigmatisation and violence both symbolically and physically.”

Highlighting the situation in Denmark, Nassri said Islamophobia was being “enabled directly through state policy and participation” and was “no longer a far-right issue but is shared across the political spectrum”.

Nassri said many Muslims in Denmark faced discrimination through the country’s categorisation of people from non-western backgrounds which, she said, took precedence over their rights as Danish citizens.

She cited the impact on Muslim communities of the so-called “ghetto laws”, a package of measures targeted at deprived neighbourhoods with large populations from migrant and ethnic minority backgrounds which the Danish government says are necessary to promote integration.

Nassri said the laws were discriminatory against Muslims and ethnic minorities, depriving them of their rights and portraying them as “enemies within the state, who live in parallel societies that must be fought".

“We also see this targeting in the way Muslims families are portrayed as oppressive and controlling toward their children and, as such, need to be surveilled,” she added, citing a law requiring non-western residents in “ghetto” neighbourhoods to put their children into state nurseries from the age of one “to get instruction in Danish values and language”.

Campaigners from France highlighted the impact on Muslim communities of the so-called “imams’ charter” which was adopted last year by the French Council of the Muslim Faith at the behest of French President Emmanuel Macron.

Elias d’Imzalene of French NGO Perspectives Musulmanes said the charter amounted to an “Orwellian policy” which sought to impose “a new reading of Islam ordered by the state”.

“The police threaten to close any mosque denouncing this new inquisition while a political hunt is also carried out, targeting the dissenting voices of the community, thus making Muslim expression essentially criminal,” said d’Imzalene.

Muhammad Rabbani, the managing director of Cage, a UK-based advocacy organisation also working in France, said French Muslims faced a “state-led programme of repression” in which organisations critical of government policies faced being censored, shut down and criminalised.

Citing the repression of Uyghur Muslims in China, and violence and discrimination against Indian Muslims enabled by Prime Minister Narendra Modi’s Hindu nationalist government, Rabbani said: “France has now joined the company of China and India, who are both carrying out a religious persecution of an entire Muslim minority.”

The conference also heard from Nehal Abdalla, an advocacy officer at ACT-P, an Austrian organisation formed to support children caught up in police raids in the aftermath of Operation Luxor.

Austrian counter-terrorism police raided 70 Muslim households and arrested 30 academics and activists in the November 2020 operation, but none were subsequently charged with any offence.

Abdalla said that families and children caught up in the early morning raids had awoken to a “real-life nightmare” which amounted to “terrorising the Muslim community”.

She said: “Operation Luxor has succeeded in spreading terror across the Muslim community despite failing to even prosecute one individual successfully. The manner in which these raids were designed and executed revealed a state-sanctioned programme of Islamophobia.”

The OSCE describes itself as “the world’s largest regional security organisation”, drawing together 57 member states from Europe, Central Asia and North America.

With the conference taking place in Poland against the backdrop of Russia’s invasion of neighbouring Ukraine, OSCE officials also stressed the importance of defending human rights and fundamental freedoms in opening remarks at the 10-day event.

Zbigniew Rau, the Polish foreign minister and current OSCE chair, said: “Human rights are inalienable, and their articulation and defence are among the greatest achievements of humanity. Denying human rights to anyone, especially the vulnerable and weak, is to take away their dignity and their sense of freedom and security.”

Delegates at the conference will next week discuss the impact of counter-terrorism policies on human rights in the OSCE region.

According to a note on the session in the conference programme: "The abuse of 'anti-extremism' laws and the labelling of civil society and those expressing dissenting views as 'terrorists' or 'extremists' in many countries across the OSCE is raising growing concerns."