General
The link was copied
News ID: 3480677
TEHRAN (IQNA) – Israeli forces have raided an elementary school in the southern occupied West Bank city of al-Khalil and attacked teachers and students. 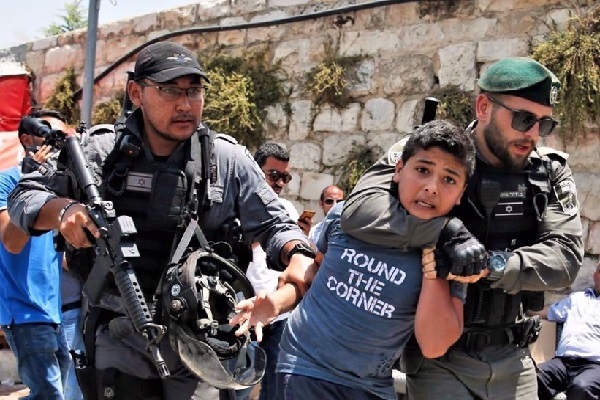 Director General of Education Department in al-Khalil, Atef al-Jamal, stated that the Israeli troops stormed al-Hajriya Elementary School on Thursday and broke into classrooms, causing panic and fear among students.

He added that the forces beat teachers and students, and sprayed their faces with pepper as they pushed them back the Israeli soldiers.

A teacher, identified as Ihab al-Rajbi, sustained bruises to his hand. The soldiers also detained and interrogated two schoolchildren after dragging them out of their classrooms. They were released later.

The incident came on the same day that a Palestinian boy died of heart failure while being chased by Israeli soldiers in the occupied West Bank.

Seven-year-old Rayyan Suleiman was coming home from school with other pupils in the village of Tuqu when troops gave chase, and he “died on the spot from fear,” his father Yasser said in a video circulated on social media.

A medical official who inspected the body stated that it bore no sign of physical trauma and that the death appeared consistent with heart failure.

The Palestinian Foreign Ministry condemned the incident as “an ugly crime” by the Israeli regime.

They said that Israeli forces stormed a house in Jalazone refugee camp, located 7 kilometers (4.3 miles) north of Ramallah, in the early hours of Friday, and rounded up a 17-year-old teen following a thorough search.

The soldiers opened live fire at a vehicle in the refugee camp, wounding two people. One of them suffered gunshot wounds the shoulder while the other was struck in the foot. They were rushed to a nearby hospital for treatment.

Additionally, gun-toting soldiers detained four Palestinians and ransacked the houses of their families in several neighborhoods of the southern West Bank city of al-Khalil.

They also forced their way into Beit Ummar town, arrested two other Palestinians and searched the houses of their families.

More than 150 Palestinians have been killed by Israeli forces in the Israeli-occupied territories since the start of the year, including 51 in the besieged Gaza Strip during Israel’s three-day onslaught in August.

More than 30 of those killed were either from Jenin or were killed in the Jenin region.