General
The link was copied
News ID: 3481460
TEHRAN (IQNA) – The Organization of Islamic Cooperation (OIC) said in a report that Malaysia, Indonesia and Turkey are among the world's top 20 halal economy exporters. 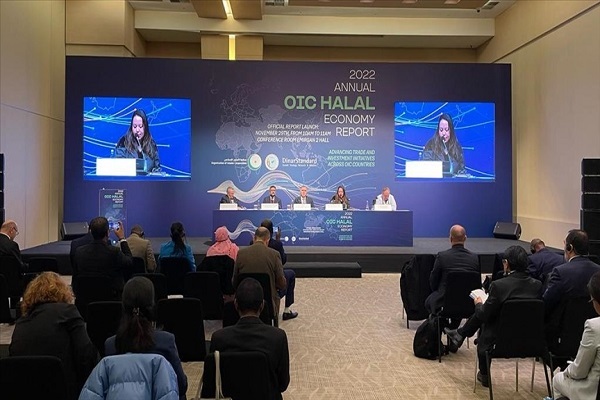 The OIC released the report on Tuesday.

Indonesia and Malaysia are the other two nations in the 57-member Muslim bloc that are in this category, said the 2022 Annual OIC Halal Economy Report.

The report was launched in Istanbul on the sidelines of the four-day 38th meeting of the Standing Committee for Economic and Commercial Cooperation (COMCEC).

However, the report, commissioned by the Islamic Center for Development of Trade (ICDT), said the OIC members recorded a trade deficit of $63 billion for halal products last year.

“Only 18% of these imports were sourced intra-OIC, while only three OIC countries (Turkey, Indonesia and Malaysia) made it to the top 20 exporters of halal economy products,” said the report, prepared by US-based market research and advisory firm DinarStandard.

The report showed that OIC members exported apparel and footwear products amounting to $101.94 billion last year, while the Muslim bloc imported the bulk of food, pharmaceuticals and cosmetics.

Turkey, along with Saudi Arabia and Indonesia, is among the top three markets in Islamic higher education, which the report said “is essential to educate industry and halal supply chain players.”

It added that the Muslim bloc is expected to spend $1.5 trillion on food consumption by 2026.

“This presents a strong window of opportunity for (the) OIC countries to ramp up production, leverage growing consumer demand for healthy and organic food products and adopt digitalization across the industry,” the report suggested.

While the Islamic finance assets amounted to $3.32 trillion in 2020, the report said the OIC members made up six of the top 10 global markets for Muslim consumers spending on media and recreation last year.

Muslim consumers from the OIC countries spent an estimated $141 billion on media and recreation, which is expected to reach $211 billion by 2026, it said.

Despite the COVID-19 pandemic having a big impact on travel, the report said Muslim travelers from the OIC nations spent a total of $86 billion last year.

Turkey has also made it to the top five Muslim nations in the OIC Halal Economy Trade and Investment Index, which ranks member nations’ global and intra-OIC trading activity in halal-related sectors.

The report recommends the OIC member states 20 actionable strategies to explore and implement, including national economic resilience building, intra-OIC/south-south cooperation, halal economy promotion and awareness, investment attraction and facilitation, and research and innovation with a focus on emerging technologies and capacity building.