General
The link was copied
News ID: 3481566
TEHRAN (IQNA) – Senior Palestinian cleric sheikh Sabri says God’s order on the Palestinian land is non-negotiable and hence people will not change their minds on that. 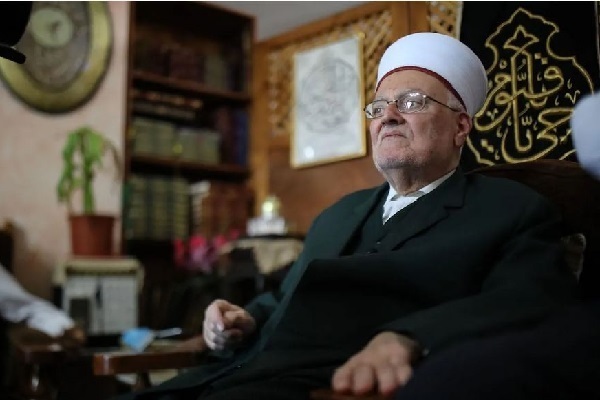 Sheikh Ekrima Sabri, Head of the High Islamic Committee in Jerusalem al-Quds, made the remarks on Tuesday in reaction to campaigns launched by some far-right Israeli groups that seek to arrest the cleric over encouraging Palestinians to confront attacks of Israeli settlers against Al-Aqsa Mosque.

This campaign is nothing new and it tries to target anyone who stands against plots of occupiers against Al-Aqsa Mosque, Sheikh Sabri said, Palestinian news outlets reported.

Palestinians are “not cowards”, rather, they are “owners of this land and God’s order about it is not negotiable,” he said.

Describing the campaign as a psychological war, he noted that occupiers are trying to force Palestinians to withdraw from their rightful stance. “But we adhere to our legitimate, fixed stance.”

“We do what we consider as our duty and attach no importance to campaigns of extremist Zionists,” he added.

The remarks come as concerns over the aggression of Israeli forces and settlers against Al-Aqsa Mosque have increased with the rise of the far-right in the Israeli regime.