No MERS Case among Iranian Pilgrims in Saudi Arabia

Social
News ID: 1412443
A medical official with the Iranian Hajj mission said no cases of MERS (Middle East respiratory syndrome) have been reported among Iranian Hajj pilgrims in Saudi Arabia. 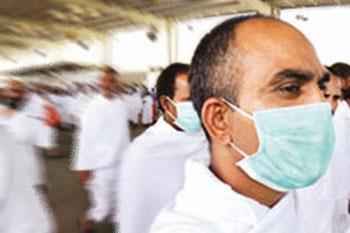 Amin Reza Tabatabaei, an official with the medical center of the Iranian Red Crescent Society's office in Medina, urged the pilgrims, however, to wear masks and observe hygiene standards.
He noted that transmission of MERS, like all other diseases carried by viruses, can be prevented by observing hygiene.
Middle East Respiratory Syndrome Corona-Virus, a deadly virus first reported two years ago in Saudi Arabia, causes coughing, fever and sometimes fatal pneumonia, killing an estimated 30 percent of those who are infected.
There is no vaccine or specific treatment for MERS, which has killed more than 175 people in Saudi Arabia and spread throughout the region, also reaching as far as Malaysia, Greece, Lebanon and the US.
MERS is a virus from the same family as SARS, or Severe Acute Respiratory Syndrome, which killed about 800 people worldwide after it first appeared in China in 2002.
http://www.iqna.ir/fa/News/1412209